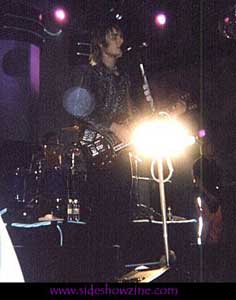 The sights and smells of downtown New Orleans just two days after Mardi Gras were not nearly as appealing as the silverchair show we were there to witness. We kept trying to look forward to the show, but it proved to be difficult admist heaps of garbage, slimy, smelly streets, and trees with cheap beads hanging fromthem like spaghetti off a fork. Nevertheless, this was more than just a trip to New Orleans... it was a silverchair road trip, and for that, anything is worth it.

The House of Blues was a medium sized venue for silverchair, but even with the 18 and over age restriction, it sold out nicely about two hours before the show.

Without a doubt, this was the best of the silverchair shows I've been to. Not only has the band broadened their musical spectrum with the new material, but their stage presence has improved as well. I was immediately impressed with the overall look and feel of the new neon stage props. The new lighting show is superb, the strands of neon changing from purple to blue to orange to green - and kudos to the crew for keeping it all together and working perfectly!

We were talking before the show, wondering which of the old songs would get the cut to make way for the new songs. I was worried some of my favorites would have to be sacrificed, but I was more than happy with the setlist. The band did a wonderful job of melding old with new, while giving everything an entertaining new twist. 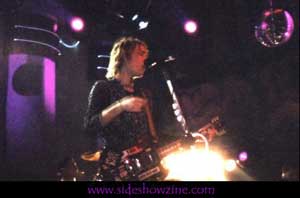 They opened with Slave, which always gets the crowd warmed up. Daniel sparkled in his silver shirt and gold glitter lining his eyes, and he seemed more intense and full of energy then I'd ever seen him before. Although most of the look was new, Dan's guitars were all very familiar, and I was happy to see the green PRS had made it to yet another silverchair tour.

Pure Massacre came next, much to the delight of the crowd who had maybe been wondering about the older songs too. Ben and Chris seemed to be having a wonderful time. Ben was shirtless as usual, and all grins as he pounded his drums, scanning the crowd for their reactions during the songs. Chris wore an interesting outfit of vibrant orange pants and black shirt. He's been keeping in shape, and he proved it as he hopped around the stage with his bass as if it was ligher than air.

The first of the new material, Ana's Song, was next. It was my favorite of the new songs when I first heard them, and hearing it live only strengthened that opinion. Daniel's voice has become much richer and more stable, and he sings this roller coaster of a song without missing a single note. Suicidal was next, and then directly into a very solid performance of Israel's Son. 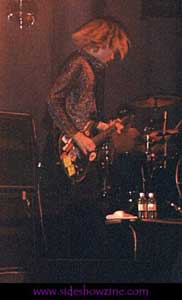 The dynamic Emotion Sickness is a song that can only be described as awe-inspiring when seen live. Sam Holloway proved himself a true member of the band as he played the haunting piano notes in perfect time with the guitar, bass and drums.

Madman rang out with full force, and it seemed that no one on stage was safe as Daniel dashed from one end to the other, head flailing wildly while never missing a lick on his guitar. What came next surprised me. Ben, Chris and Sam left the stage, and I expected the first notes of Cemetery, but instead was pleasantly surprised by an acoustic version of Tomorrow. I'm glad they decided to keep it in the set for newer fans, and impressed that they've made it interesting for those of us who have heard it a billion times.

Next came the new Miss You Love and Freak Show fave, Abuse Me, both of which I was very happy to hear.

At this point, Daniel informed the audience that he was going to make the Spice Girls analogy, and that it would be the last time he would ever do it because "only one person thought it was funny". He then compared each of the band members to the appropriate Spice Girl, starting with Ben, who was Scary Spice (because he's so wild); Sam, who was Baby Spice (because he's just getting used to his new instrument); Chris, who was Sporty Spice (because he works out and keeps in shape); the audience, who was Ginger Spice (because we were leaving after the show); and Daniel was Posh Spice (because he loves himself). The band then went into a hard and heavy rendition of The Door, which in my opinion, is one of the best songs from Freak Show performed live. 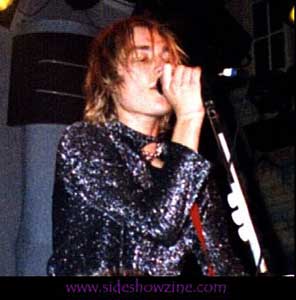 The audience seemed to know what was in store for them as the first distorted notes of Anthem for the Year 2000 began to float through the venue. The neon lights blinked and switched colors as the guitar riffs began. Daniel stood straight and tall at the microphone, his gaze seeming to look over the audience, through the back wall of the venue and somewhere beyond. "WE ARE THE YOUTH!" He sang loudly, and raised his arms above his head to clap his hands, and the audience did the same. "WE ARE THE YOUTH!" He sang again, and put his hands out to the audience, imploring them to repeat his words. "WE ARE THE YOUTH!" the audience yelled back. The exchange continued. By the time the song went into the first verse, the crowd was in an excited frenzy, hands in the air, screaming wildly, as if they knew this song was for and about them. Freak was next, which gave way to much crowd surfing and moshing, something that usually happens at the first of the show, and not so far into it.

At this point, the band disposed of their instruments and made their way off the stage. The audience, not nearly ready to let them go, stomped and screamed and chanted "sil-ver-chair!" until finally the foursome strolled back onto stage. Much to my surprise, they began the encore with Lie To Me, a song which was rarely played during the Freak Show tours of '97. The waves of crowd surfers continued, and the moshers exploded into chaos.

The first riffs of Spawn Again filled the venue, and the crowd erupted into shouts of approval. What an incredible song, with Daniel screaming his heartfelt lyrics about animal liberation as the drums pound and the bass vibrates. A truly worthy end to a show well done.

As the crowd filtered out through the exits and the curtains closed on the House of Blues stage, I took one more look around and smiled, feeling as if I had just witnessed the beginning of something incredible. Welcome, Neon Ballroom. We're so glad you're here!