Ok, I’ll abridge first the bad things that happened because of the stupid public... 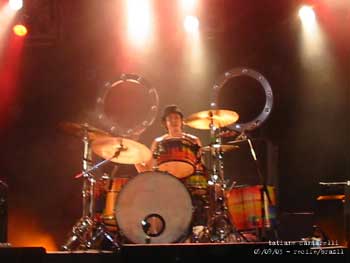 - It was the real first international show in Recife, and the public were very euphoric, so, in the beginning of the show, I couldn’t sing The Greatest View, After All These, and some other songs because of the tumult...
- The public didn’t know Diorama as the should know! There was two side: The rockers... they wanted to listen the old sonds from Frogstomp and Freak Show, and many stupid girls with their boyfriends... they knew only Miss You Love and Ana’s Song...
- Because of that, Silverchair didn’t play some songs that they’ve played in other shows: Across The Night (the name of the tour!!!!!), Black Tangled Heart (Oh, God I wanted so much to listen this song live...), Paint Pastel Princess, Asylum (Yeah, me and my friend wanted to hear this song live, but nobody knews it!), Petrol and Chlorine, Steam Will Arise, Do You Feel The Same, and Slave (but Slave I didn’t miss)...

I have shame of Recife, because I think we (not me, I sang all the songs!!!!! My friend Rodrigo too =) disappointed Silverchair! In Ana’s Song, almost in the end, Daniel told us to sing, and the stupid people sang mistaken!!! 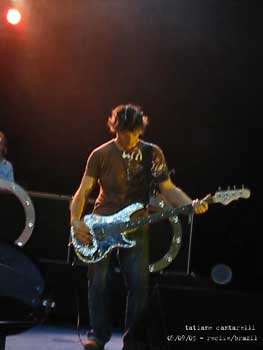 The Lever was great!!! The majority didn’t know the song, but I sang with all my soul!!!!! The modifications in that song were great!

Tuna In The Brine was the best! Nobody knews it again, But I myself with a girl who I don’t know sang the song!!!!! Rules!!!

World Upon Your Shoulders was great, but the tumult damaged... the same for After All These Years (Daniel playing piano!!!!!!!!), The Greatest View and Without You...

Luv Your Life was very great too, you know, see Daniel playing the “acoustic” guitar (here in Brazil we call “Violão”)...

Emotion Sickness was very good (I could sing...!)!! After the music has finished, Daniel continued playing guitar making some solos, and Ben & Chris playing drums and the bass... was very good!!

And Daniel played the guitar with the teeth!!!!!!!!! Man, it was the greatest thing in the show!!! Daniel, Ben, Chris, they’re playing their instruments very well!!!!!!!!! 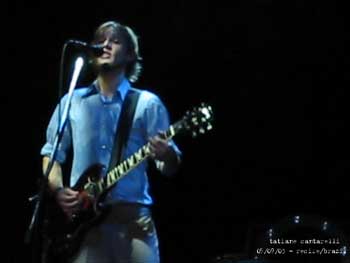 The songs are not in the same sequence of the show, here is the true setlist:
After All These Years
The Greatest View
Word Upon Your Shoulders
Without You
Emotion Sickness (with a tardier ending)
Luv Your Life
Israel’s Son
Ana’s Song
Miss You Love
A Homage to Recife/Brazil
The Door (tardier ending)
Freak
Anthem For The Year 2000
Tuna In The Brine
The Lever (with a long solo in the middle of the song)
One Way Mule
Unkown Song (not from any CD or single... I think it was a cover or a new - very great ­ song)

But I missed all the songs they didn’t play, and My Favourite Things, Too Much Of Not Enough, etc.... but it’s ok!

Today i saw the best concert of my life!
They started playing a beautful song "after all these years"...
daniel played this song in the piano!!!!! 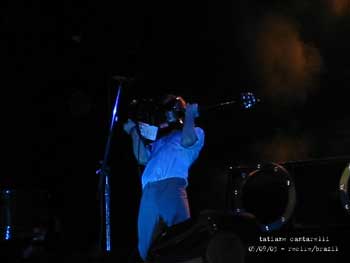 they also played "the greatest view","world upon your shoulders", "without you", "luv your life" etc.

The best songs of the concert was "the door"(daniel played guitar with his mounth!),"israel's son"(was amazing),"Freak"(all the people jump without stop), "anthem for the year 2000" (was amazing too), "the lever" (was the encore & daniel again played the
guitar with his mounth). Also played: "one way mule", "ana's song"(all the people sung with the band), "miss you love"(amazing),
"emotion sickness", "tuna in the brine"(super great).
Daniel was in a so funny night!! he swinged his ass for us!!!!!(was the funnier!!!!), did some litlle "raps"..... was a surprise for us knew a so funny band because we waited to know a soooo calm band but we knew a funny band but with a big talentous and symphatic with their public!!!!
so thank silverchair!!!!!
we are waiting you here again!!!!!
because we know that this tour will be amazing!!!!!!
bye bye!!

Finaly, the waiting was over. 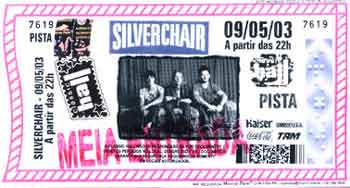 There was something different in the air that night. When i got to "Classic Hall" and saw that HUGE crowd of people waiting for HOURS to get inside - there was people there since 5 AM - and singing together, i've had a little brief of what i was about to experience in the next hours...

Since there was no band to open the show, we waited about 2 hours standing on foot - the gates were open at 9 PM, the performance began at 11 PM. The house was completely full, about 10.000 people pushing each other to get closer of the stage. When they started the "countdown" to the start, the crowd went insane, there was a "wave rush" from the stage of people pushing thenselves. Girls were screaming and boys getting wild. When the courtains of the stage opened, it was empty and then Daniel showed up and again there was more and more screaming. He walked by the stage as Ben and Chris were setting up their instruments almost "hidden" in the shadows. Daniel sat at the piano and started singing the first verses of "after all these years", that were only recognized by me after a few seconds: at first i couldn't hear anything but screams, and then i felt like passing by, after this "critical moment" i was just staring at the stage and yelling the lyrics back. That was the first song. Just Daniel, the piano and us, 10.000 fans singin' togheter. Up next was "World Upon Your Shoulders - my personal favorite from "Diorama" - and all i can remember from now on is that i jumped and shouted A LOT! I got completely freak out! 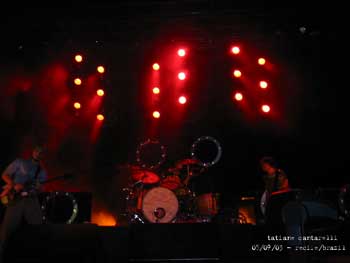 It was almost a non-stop show. Daniel didin't stopped playing any minute of the entire almost 2 hours of performance - except when he was changing guitars (9 times, if I am right). He did some cool stunts like playing the guitar laid back on the stage floor, played around with his voice, licked the guitar ALL OVER swinging his "behind", and he did some steps to us as well! (shaking his hips and singin something like: "this is a song to all my friends in Brasil, this is a song to all my lovers from Brasil"). Unlike Daniel, Chris seemed a little shy - i almost couldn't get to see him! Certainly the best song of the night was "Emotion Sickness", followed by "Anthen For The Year 2000" and "Freak". "The Greatest View" and "Without You" were especialy praised by the public. "Miss You Love" made the crowd settle down and sing it togheter, some people cried - i did... - and "Israel's Son" got an unreconizable new introduction - perfect! "The Door" and "One Way Mule" were a surprise the public, while "Ana's Song" was particularly awaited. I can't remember the songs in any particular order, so i can't tell the setlist... but the last song wasn't recognized by me - maybe some new stuff of the band, i have enjoyed it myself, as long as i remember, i was the only one around jumping and singing it back (the chorus, that i can't remember anymore, but sounds somewhat like "kids" or something - and there was another song in the middle of the setlist that i couldn't identify too, but i had the feeling that i knew it...

Overall, the show was incredibly amazing, certainly a night to remember for a long time, thank you guys, big time!!!