Amtrak train No. 29 from Washington, D.C. arrives in Cleveland, Ohio at 2:45 in the morning. Like much of the northern United States, Cleveland can be very cold in the middle of the night in February. The wind whips across Lake Erie to greet arriving railroad passengers, who hope that a taxi is nearby with the engine running and the heater on full blast. 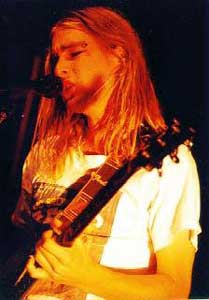 Maps indicate that Cleveland's famed Municipal Stadium stands between the lake and the train station. However, if you look for it now, you'll see nothing. The stadium has been torn down in favor of a more modern facility.

But just to the east, the Rock & Roll Hall of Fame and Museum angles its way up the lakefront skyline. Seeing it for the first time reminded me of why I'd made my first visit to Cleveland -- silverchair's show that night at the Odeon.

The Odeon is one of a number of concert halls in a section of Cleveland known as "The Flats." The area is bisected by the Cuyahoga River, which seems to bring the winds from the lake much like water conducts electricity. Hours before the doors were scheduled to open, brave fans lined up in front of the Odeon, steeling themselves against the cold, hoping to get the best available places to stand for the show. When I overheard some of them talking about how often they check silverchair's Internet site, I couldn't help striking up a conversation, and in the process met Erin (slpwink@aol.com), who I already knew via e-mail. (That's Erin in the brown hat in the picture above.) 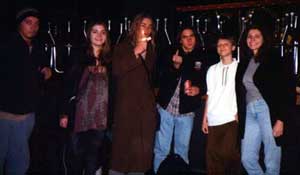 She and her friends were among the first to get inside the Odeon when the doors opened, and the sell-out crowd was rewarded with an excellent performance by opening band Handsome and the return of silverchair to Cleveland after an absence of more than 14 months.

The Cleveland crowd proved the city's reputation for musical appreciation by their frenzied response to silverchair's set. One of the highlights when many in the audience began to chant, "Learn To Hate! Learn To Hate!" I've never heard so many people in an audience at a silverchair show call out for a particular song -- and bear in mind that Freak Show had only been in stores for nine days! 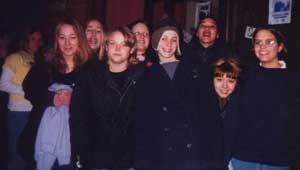 After the show, Ben Gillies said that for the briefest of moments, Daniel Johns seemed to be considering fulfillment of the crowd's request before he thought better of it.

"It's not gonna happen," Daniel reluctantly told the crowd. Learn To Hate shreds Daniel's vocal chords to pieces, and that is why the band has not performed it live in quite some time. Ben wondered if sound technician Peter Ward could do something with the vocal mix to help Daniel out on LTH, but Johns would probably just sing it the ways he's used to singing it anyway. 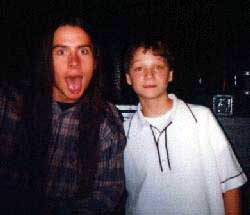 On February 13th, I went to see silverchair for the second time in Cleveland. Handsome opened, they too are rad. The show was packed. There were so many people. Handsome played a great set, then shortly after, the Freak Show backdrop came down and the freaky show music played. Then, out came the band.

The show started with Slave, then the pit got crazy. I thought I was going to die! silverchair have certinly improved since I saw them in 1995. Some of the other new songs they played (from my memory and in no specific order) are Freak, No Association, Lie To Me, Abuse Me, Cemetery (which was great, I might add), and Pop Song For Us Rejects.

The songs from frogstomp which they played were Israel's Son, Tomorrow, Faultline, Pure Massacre, Leave Me Out, Findaway and Madman. Daniel has certainly gotten more aggressive on stage. During his vocals, he often screamed into the microphone like a madman.

My favorite moment was when he said, "Hello Cleveland! You guys rock! That was the coolest thing I said all day!"

The show was great and the audience wanted more, but all good things have to end sometime. I hope they do come back on the next tour!

Hanging out at the Odeon before the silverchair show felt like time-warping back to the old Ed Sullivan show 33 years ago. The rehearsed "We Love You" shrieks and hysterical fits from the overwhelming mass of pre-teens were so mesmerizing, the unfolding of the circus sideshow backdrop to the pipe-organ strains of that traditional old circus song -- you know, the one that the clowns pile out of the car to -- knocked you back into present day. It's almost as if you'd been expecting, "Ladies and Gentlemen... the Bea-"... Hey, wait a minute. Where are the giant arrows pointing to the drum kit? 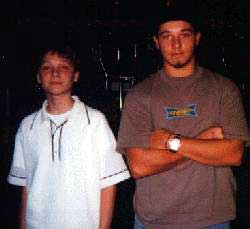 Kids, kids, kids. And all of them screaming. While it's safe to say that Rolling Rock didn't do much business at this show, Philip Morris sure made a killing. Ninety-three percent of the crowd was under the legal age of any sort of harmful consumption, but that didn't stop most present from lighting up a cigarette or two. No matter... the illumination from all their lighters allowed me to take notes.

Once silverchair finally did enter the ring, amid freak-show illustrations reminiscent of the old Operation game board, surprisingly, the screams toned down a bit. A bit. Marching out to the new Slave, silverchair took their perch beneath a sign announcing "Living Curiosities." And you thought those giant, pointing arrows were subtly clever.

A fresher, much more energetic Leave Me Out saw the youngsters diving in without a net, quite literally, while the familiar opening notes of Abuse Me threw all the kiddies into a frenzy as Daniel Johns introduced some bloke onstage as their "sexual guidance counselor." Thank God they got one, 'cause Lord knows these three kids are gettin' more than the average adult is. 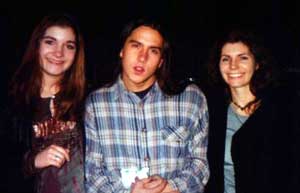 Before belching into his own Cornholio-sounding Freak, Johns wasted some quality jam time bantering with the audience. Musically, silverchair are one hell of a live band, if Johns could only keep his mouth shut. (Between songs, that is.) If he could cut out all of the needless "f-word" gibberish and ignorant pleas for balcony-diving, silverchair just might find time to toss a few more scrumptious tidbits to their sea of hungry, adoring fans. Drummer Ben Gillies and bassist Chris Joannou's infectious rhythms are so tight and mature beyond their young years, it's a shame to contradict them with the phony onstage nihilism parade.

Besides, don't they have that same old motherly adage Down Under about "If your friend told you to jump off a bridge..." This audience was much too impressionable to suggest balcony-diving. In attempting to connect with so-called angst and misery, they alienated rather than communicated. Still, considering the age-group that they preach to, their G-rated sideshow is probably appropriate enough.

This ain't no Sgt. Pepper's ... but it ain't no Joel-Peter Witkin, either. 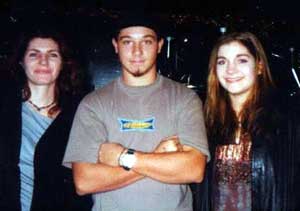 Johns settled down for a moment with the evening's lower-profile highlight, his intensely passionate solo performance of Cemetery, but jumped right back in, suitably shifting into Suicidal Dream. Something named Jesse the Headless Doll made its onstage appearance just in time for the anti-fat-boy anthem, Tomorrow -- much to the ecstacy of the screamers in the crowd (I don't think Ringo got this loud a response). The Monkees-tinged The Door invited an all-out slam/mosh/crowd surf-fest down front. The undulating roll of the pit was so hypnotizing, I spent 10 minutes following the journey of an orange-shirted punk back and forth through the madness like the little red-coated girl in Schindler's List.

Being for the benefit of Mister Trite, the trio misstepped with a few numbers before settling into the crowd-pleasing Pure Massacre, plugging into the room's hormones with a sweet energy so raw, it's probable they forgot to take their Ritalin. 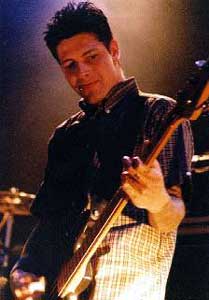 Lastly, through a hog's head of real fire, the fab three returned with an encore beginning with a meandering, masturbatory improvisation sounding like a botched sound-check. But after turning out a decent Lie To Me, they finished with the impressively maniacal and deliciously furious Israel's Son, sounding like a magical mystery tour to Disney Land, all coked up on Clearasil and Sunny D.

Openers and labelmates Handsome fueled the interests of most chaperones in the crowd with their own take on CBGB's Light. Savory doses of guitar wizardry on Needles, The Air Up There and Thrown Away made for a religious experience of our own, as the band led the crowd in a quiet prayer of agony and self-loathing. Belting out most of the material from their debut album, Handsome's genuine energy proved them far the superior act, with no unnecessary antics to boot! The mass of overanxious 12-year-olds would beg to differ, but at least they had manners enough to keep quiet during church.

And, of course, Henry the Horse dances the waltz.