Those chipper Australian teens who conquered America with their 1995 debut frogstomp (Epic), an unabashed and enthusiastic replay of grunge's thrash-'n'-groan aesthetic, are back for Round 2. 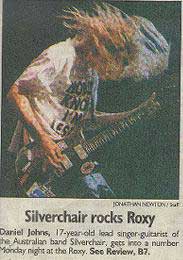 Importantly, this was a period before Nirvana flamed out and Pearl Jam got antsy about rock stardom. There was still a promise of innocence as the music began to transform from innovation to cliche.

silverchair sells the cliche, but what makes the band entertaining is its embrace of the innocence. The band's second generation grunge moves, which sold out Monday's concert at the Roxy, strive to compensate with sheer energy for what they lack in originality.

Opening its second U.S. tour at the same venue where it launched it's first, the group punched through a tight 80-minute set that mixed familiar power ballads and feedback-edged anthems, while dishing up a healthy helping of tunes from its new, sophomore release Freak Show. If anything, the material signals the band's eagerness to dabble in variety. The most convincing rockers slammed with breakneck ferocity or locked into juggernaut rhythmic passages that down-throttled into deliberately slow, repetitive riffs -- the sonic legacy that heavy metal's Black Sabbath gave to Nirvana inspirations the Melvins. 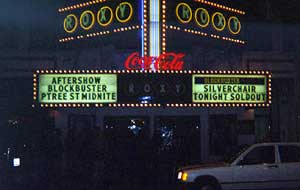 On the flip side, Johns, whose easy-to-toss blond locks mark him as a natural-born hair farmer, also indulged the gentler side of teenage angst. For Cemetery, which could have been a song about adolescent alienation or merely having to share a house with parents, he strummed solo electric guitar. Near the back of the hall, a high school girl had conniptions. She jumped up and down, raised the index and litt1e fingers of both hands in a familiar concert salute, and shouted, in hasty cadence: "'Cemetery!' OhIlovethissong!"

As channels of hormonal fear-and-loathing, silverchair are blatantly lame. During one tune, Johns repeated a a common rock-star profanity, as if trying on a tough posture. A few moments 1ater, he was grinning at the microphone, offering a tentative "thank you" like the polite young surfer he is.

Go buy a Nirvana bootleg if you want to simmer in psychotic bile; what silverchair offer is puppy love cranked to 10.

Coming all the way from Knoxville, Tennessee, and not knowing anything about Atlanta, the show was hard to find. I rode all over Atlanta in the car with my brother for two hours trying to find The Roxy. We found it at 8:55 exactly. 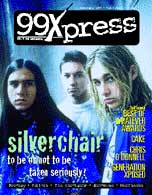 With only five minutes to spare we ran up to the entrance and forced our way through herds of people so we could get a good view. About 10 minutes later the lights focused on the backdrop, and this weird carnival music started to play. silverchair came out, and my ears went flat due to the screams of all the 15-year-old girls.

I was shocked to find out that Daniel Johns looks a lot younger than he does on their videos. Slave was the first song they played. I hadn't heard the new album, so I didn't know what the heck was going on. Daniel went crazy. He really rocks out when he plays.

Let me give you a quick run down of the songs that they played and what I thought.

Slave: Man, it was so cool I almost ripped my hair out.

Lie To Me: Not as cool as their first shot at punk (Findaway).

Faultline: It really kicks my ass.

Pure Massacre: Not my favorite, but still cool.

The major highlights of the show were definitely Tomorrow, Israel's Son and my personal favorite, Madman. I was also surprised to see that Daniel had a cool stage presence. He was talking to the audience and making people laugh. He asked people if they had ever heard of Jon Bon Jovi. I think someone was playing a joke on him, and told him to ask the crowd. He pronounced it really weird. Sort of like "Jon Bon Joveeee." It was funny.

My final thoughts are this: Ben Gillies kicks ass at the drums. Chris Joannou is good at bass, but he needs to rock out more. Daniel Johns is the most talented performer I've seen in a long time. He sings great, he knows how to play guitar, and he can bang heads with the best of the Slayer fans.

Final thought: When you go to see these guys live, don't take off your clothes and throw them at 'em.