Silverchair returned to the stage with a bang. The band, billing themselves as "Short Elvis" (the name they had before they were called Innocent Criminals) rocked the Gaelic Theatre in Sydney.

Exclusively for chairpage visitors we have the setlist and photos:

It was an incredible gig the other thursday night!! Nothing short of what I expected really for a "warm-up gig?". You all looked like you were really enjoyed playing together again live, and with a great crowd bar one stupid fuck, the night was awesome!!

The photo that i captured here with everyone jamming  just about sums up how special that gig was for myself & my 2 sisters. First chair gig was UTS stomp ( so long ago ) & I have enjoyed your jouney so far..

Motts shots look great as usual but this was the "Greatest View" I got. 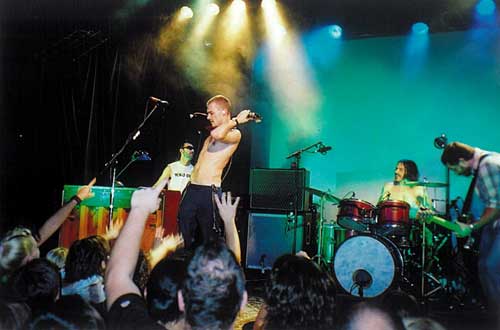 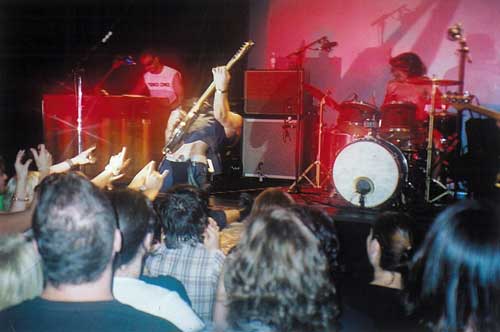 hey everyone - was great to see you on thursday. you all looked so happy to be playing together, and these shots capture this. see you at the escape-keep smiling. lucy x 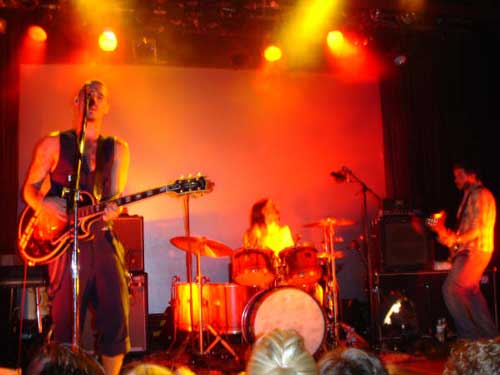 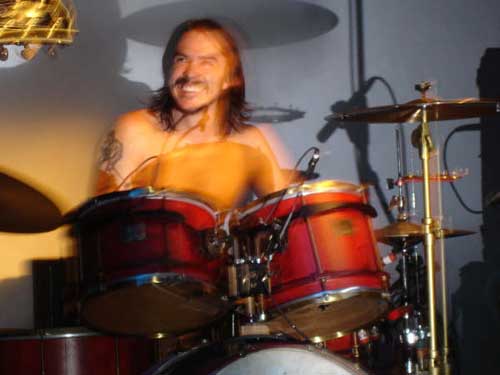 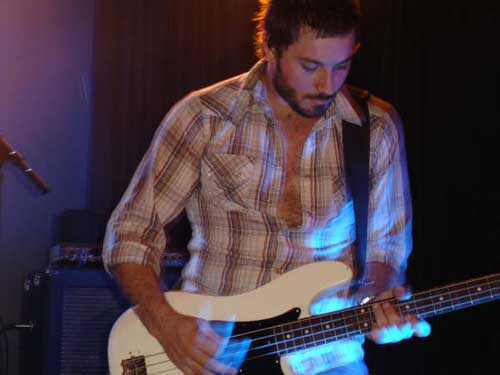 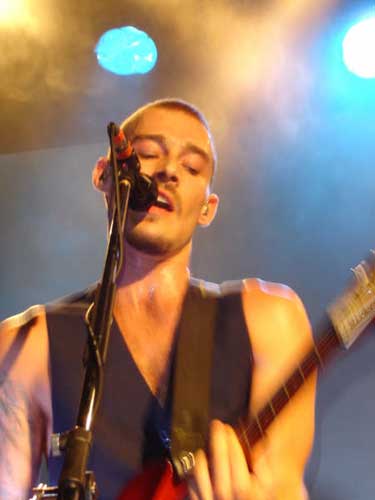 The queue took a while to build up, not as many people getting there early as epected. But the atmosphere was certainly growing, a small handful of us ticketless dying to get in, hoping that the odd chance of someone selling tickets would come along, the tension between us few was quite bad at times, as we all wanted in, but were not sure if all would.

I managed to find my way backstage before the doors opened and met paul mac and Chris and 2 ladies who put me on the guest list, so i was completely stoked by that. As the doors opened and the line began to go in, there was an amazing feeling, just walking though those doors was complete bliss, entering a dark small world, with a small stage, it truly was surreal. As the crowd filed in, it slowly grew to fill the room, as the guest DJ began to play later on, it only made the crowd grow more anxious to see their favourite band play. It was a rare chance and something we'd all been dying to see. As the DJ ended his set and the band took charge of the stage, you knew it was going to be a night to remember. The mood was set the timing awesome! and basically a really good crowd.

Opening up with "the man who knew too much" was very brave i thought, but was an appropriate way of showing us the begining of a new era of the chair. The setlist was great, it really suited the venue and showcased all the different genres of silverchair. The mood was perfect, the band played brilliantly, was sooo much better than expected. Hearing the new spin on the songs was truly refreshing, with Daniel manipulating the sound of his voice yet again, with a more nasal texture, but some how suiting the songs better than ever. The new tracks went off really well, quenching the emotions that had been building up over prolonged periods of craving new matterial from the band.

The energy between the three of them accompanied by Paul Mac was somethign that i truly missed, just watching them muck about on stage throwing glances at each other truly made the night more enjoyable, the fact that you knew they were having an awesome time up there was reflected in the crowd. The new tracks played; "The Man who knew too Much", Straight Lines", "Mind Reader", Sleep All Day", "If You Keep Losing Sleep", are definitlely more raw with a great groove to them.

The energy that they've captured with these truly make me excited for the next album. The band have harnessed each element of the band to the best of their ability showcasing some extremely catchy melodies, great bass lines, empowering drums and brilliant guitar work. It all works together perfectly. It's definitely a rockier side to the band, but not to be mixed with their earlier grunge/rock roots, this is a new spin on it, with an obviously happier feel to the music. Nice to see that the band are doing what they love again! it was missed. The show ended, and I was left in a state of pleasure and amazement, my favourite band had returned better than ever, chattier than ever, and all in all, well worth the wait! thanks Silverchair for the night of my life! I will never forget it!

The doors of the club opened about 7.30 pm.  There was a bit of a line up but the ladies on the door were quick and organised so it all moved very quickly and pretty soon there were people gathering inside the club.  It was a heaps good venue – cosy and intimate – and everyone there seemed to be in a good mood.  Until about 8 pm everyone was just standing around, having a drink and chatting but you could feel the buzz start to pick up around 8.  People moved towards the stage to get in a good spot for the show and most people were enjoying the DJ (who was really good!).  While we were waiting a few people caught glimpses of the boys hanging out upstairs with friends and family which created even more of a buzz and people were getting a bit restless waiting for them to come on.

At about 9.10 pm or so Silverchair finally came onstage and everyone in the audience went wild.  They opened with a new song, “The man that knew too much” which was hard coz no one could sing along, but you could tell everyone was pretty keen to hear some new stuff so it went down well.  I know I was anxious to hear the new stuff to see what direction Silverchair were headed with this new album and I wasn’t disappointed!  I thought the new stuff had a really good sound and feel and was a bit heavier than some of their more recent stuff which was good news for those of us who’ve been around since Frogstomp…  (despite how Daniel refused to play anything from Frogstomp for the old timer who bought him a drink!)

The old stuff was as good as ever, they sounded like they’ve been practicing pretty hard coz they were really tight as a band.  The highlight for me was probably when they played The Door coz that is one of my old faves and the crowd absolutely loved it!  Daniel even noticed how stoked everyone got when they played it, saying “you guys are so happy!” which we were!  I also really enjoyed the newy “Mind Reader”.

Like other people with reviews have said, it was really good to see how much the guys seemed to enjoy being there.  They were all grinning at each other throughout the show and seemed to have missed playing together as a band which was really good for us to all see!

It was an awesome show which didn’t have too many indications of a “warm-up” at all besides the small size of the venue, which I thought was definitely a good thing!  I think everyone who got tickets was privileged to see the great show we got that night, and as Tom Williams said after the show: “The ‘chair are back!”