By TARQUIN
Photos by ALEJANDRO 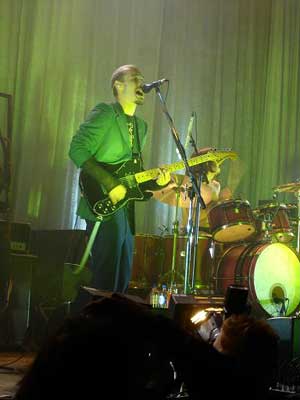 Wow this was an awesome show! Id stood at the front since 3 to get my spot but it was worth it. I was right on the gate, directly in front of Daniel and by the time the chair came on it was so tightly packed you literally couldnt move. The atmosphere was awesome, so much excitement.

They started with a new song, I think it was sleep all day, but it was hard to tell, it started with a kind of funky drum and bass riff which was pretty cool, and the chorus was almost dissociatives like (think what you will) but it was a pretty cool song and the crowd went nuts! Just for the tech heads Daniel now plays through an Vox AC30 into a Marshall cab, he also had a soldano amp but it wasnt plugged in so perhaps this was just for show because he is (or at least was) sponsored by soldano, Chris was playing through two Ashwon combos I think and Chris had his less colourful Italian kit..

Next was Emotion Sickness which was incredible, listening to the 10000 or so crowd singing along was unbelievable. Next they launched into the Greatest view, another crowd favorite. The guys had so much energy it was just fun. Next up was world upon your shoulders, probably the weakest bit of the set, its a good song but it just didnt seem to take of on Friday, a shame but it was by no means bad. Next up was Sleep all day, and I got to say its an awesome song, kind of funky again but solid rock with an awesome chorus. It was weird watching the crowd that was going nuts in all the old songs suddenly shutting up and listening to the new songs, quite cool. Then they hit us with Annas song, once again the crowd helped. 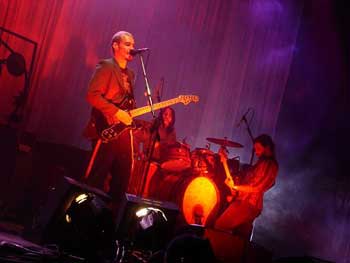 The set slowed down after that and we got treated to stripped down versions of Luv your life and across the night. Paul Mac was handling the piano that night and it was interesting what he did with the generally cluttered and thick instrumentation of those songs. There were very little strings and it was nice to hear these songs in a different way, and for the record they sounded just as good if not better like this, much um, rockier I spose. It was weird actually, it seems that perhaps Daniel was a bit bemused by the Diorama thing, he started by saying 'this a song of our lesser known album' about luv your life and then before across the night he said 'this song may make you question us as a band.' At the end of both of them he was clearly pleased when the audience really liked them and he kept saying 'that wasn't to bad was it'. Perhaps his experience at Rock it festival were those songs weren't received very had made him a little unsure of how they would go down. But they were good! Next up was another rocky new song, it was cool and again had an almost march like chorus, I don't know the name but think a heavy intro, semi funky verse and march chorus. 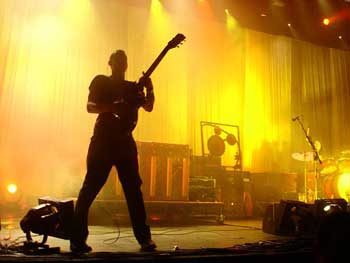 Then we had without you. Daniel was quite talkative and decided to dedicate the song first to the boys then changed his mind and said it was more of a girly song, he also said thanks to all the men that like us, it doesn't usually happen. At the end of without you they went straight into Freak. Every person in the audience went crazy, no kidding it was insane, its not my favorite song but it was definitely the highlight of the set, the band don't treat it seriously anymore but its just a fun rock song and that's exactly how they played it. We had the usual feedback intro and screamo second verse and crowd sing a longs of 'im a freak' brilliant! Next another new song, a 'bon jovi' like song, actually it was more a dissociatives like song. Slower than the others I think it was called straight lines.

I cant remember exactly what happened then but I know there was another new song, the heaviest with an awesome bass line and finally the lever, which toatally went of. This was an awesome show, the new songs sound mostly good, I think perhaps theyre going to turn out quite raw and much more commercial than diorama, but anyone who thinks its going to be a diorama 2 I can assure you once again they've changed! The band are in high spirits, Daniel is funny, he made a joke about the audience being patient while he fiddled with his guitar and how we had more patience than a hospital, it wasn't exactly genius but everyone laughed. It was just fun, oh and Daniel skulled water, something else and vodka because we made him. 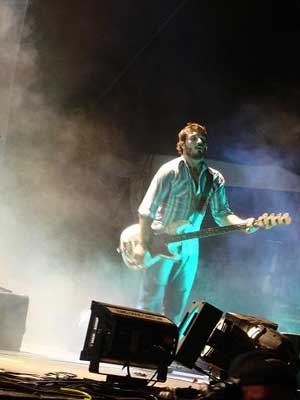 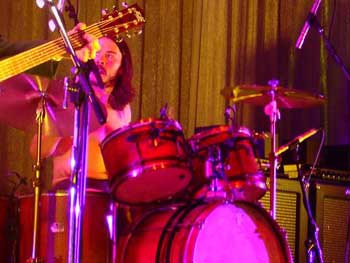 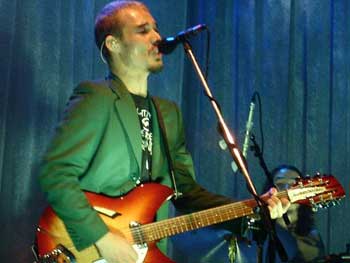 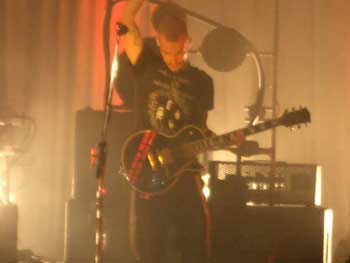 Today was a great day.The atmosphere at TGE coudln't have been better.It was a beautiful day,not a single cloud in the sky.

Something For Kate was awesome. Their new songs were really good,and i'm looking forward to their new album.But they played the last song,and the atmosphere really reached a high. Everyone, im talking thousands of people start waiting and pushing to the front of the stage waiting for Silverchair to blow everyone away. Keep in mind this is an hour before they actually do reach the stage.Soon chants of 'Silverchair, Silverchair, Silverchair' start, and the crowd is in a frenzy, desperate for the best aussie band to come on. The cheers and claps just for the instruments were amazing. People saw Ben's drumkit being brought out and immediately reacted more loudly then they did to any other band.

6:30 came quickly, though not quickly enough, and the crowd was growing restless. Chants for Silverchair and Daniel continued, and around 6:35, a massive roar came from the crowd as Paul, Ben and Chris entered the stage, shortly followed by Daniel. The crowd went mad!! Ben started playing the drumbeat to The Man Who Knew Too Much, and as Daniel started singing this great new song, the whole crowd literally pushed up by about 5 metres. I was 2-3 metres from the stage, and after the first minute of The Man Who Knew Too Much, i was 10-15 metres back. The crowd gave a very positive roar to the new song, and once Daniel brought his Les Paul out, Ben counted them in, and possibly THE BEST Emotion Sickness began. The crowd went crazy, and the entire crowd started singing the lyrics to Emotion Sickness louder than Daniel. The only times really that i could hear Daniel singing was during the new songs when noone knew the words. The cheers from the crowd after every song were very inspiring, and heartwarming to say the least. 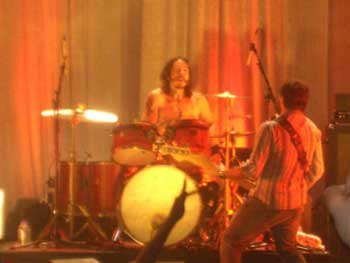 The Greatest View followed Emotion Sickness, to which a mosh pit began, and we got pushed back another 5 metres. The crowd was absolutely crazy. The lighting was beautiful, creative and jaw-dropping. World Upon Your Shoulders was then played, followed by Sleep All Day, Anas Song and Luv Your Life. Daniel had a few drinks. He said "I'll be right with ya after i have enough of this bad boy!". The crowd got him to scull his drink, after which he said "If the show goes downhill from here on, it's your own fault. "Someone yelled out at Daniel to take his shirt off, to which he replied "Nah, i already did that in Adelaide and had to suffer the consequences." Daniel said "This song may question our abilities as a band but we're gonna play it anyway." and he began playing Across The Night, With the crowd adding yet another positive outburst. This was followed by If You Keep Losing Sleep.Daniel then said how funny it was how many guys loved them, and then a huge cheer from all the guys made him laugh. Daniel then dedicated the next song to all the guys, but then changed his mind and dedicated it to all the ladies. And thats when they started playing Without You. Freak followed, and i can't explain how crazy the crowd went to this. The song was played in Db, a change from the regular dropped-D tuning, and the crowd sang every word twice as loud as Daniel. The crowd became really dangerous, yet fun, to say the least.
I can't remember his exact words, because i was too mezmerized, but Daniel said something about the past and that we'll love this next song, and they started playing Freak! The best version of that song bar none. The WHOLE crowd moshed to this and everyone just jumped and went crazy. Afterwards, Daniel grabbed his Les Paul and chucked it against these little speakers they had on set. He wacked the guitar into them, then chucked it twice against them before carrying it back off stage. 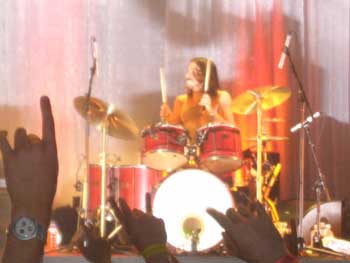 Daniel brought out his Green Paul Reed Smith to play The Door, but a roadie took it off him saying he didn't have enough time. So he brought out the black PRS, and as they went to close the show with The Lever,they had to stop 10 seconds in because Chris had the wrong bass and had to change it. So they restarted.Near the end of the song, Daniel jumped down on the ground, while Ben leaned over his drumkit smiling, and looked down, and he just lied down and started playing the heavy part of the song. It was great.

When the rest of the band walked off stage, Daniel climbed up onto the small speakers set thing and started smashing his guitar against it. He then got off it, chucked his guitar at it, caught it, then chucked it again,this time harder, and just let it drop to the ground. He walked off, and feedback just ran through the grounds. 5 minutes onwards, me and a group of people continued chanting 'Silverchair', but the roadies began packing up the equipment.

So afterwards, my friend,his sister and i went for a walk around the place, and just as we got back to the stage, 3 men walked past us and my friend's sister said "oh my god, its Daniel" and walking 2 metres from us was Daniel, but by the time we realised what was happening, he had gone backstage. about 20 minutes after that, we were crossing the road but stopped because a white van was driving past, and in that van sat Daniel, again 2 metres from us.

To close this, it was definitely THE BEST silverchair gig ive EVER seen. The crowd was amazing, and it's just so great seeing the 'Chair back together again.
THE SETLIST:
The Man Who Knew Too Much
Emotion Sickness
The Greatest View
World Upon Your Shoulders
Sleep All Day
Anas Song (Open Fire)
Luv Your Life
Across The Night
If You Keep Losing Sleep
Without You
Freak
Straight Line
Mind Reader
The Lever