“You’re gonna’ want to get off the phone,” my wife mouthed to me as she rounded the corner into my field of view. “Guess who I just met?”

Not two hours prior Andrea and I had landed at Bob Hope Airport, taken a shuttle to our one-night home at 3900 Wilshire, and begun hoofing it across the eighteen blocks between our bed and where I hoped we might see them.  About a mile into our walk Andrea stopped.

“What makes you think we’re gonna’ be able to watch this show?”

I hadn’t stopped moving. I didn’t think there was time. Turning around, I told her

“Then what the hell are we doing?”

Andrea gave me the look.  If you’re married, you know the one.  I didn’t blame her.  We had had a whirlwind morning.  The Transportation Security Administration had stopped us for a few extra minutes because, apparently, Michael Burns is the name of at least one suspected terrorist.  Not me.  I swear.

And we were tired.  Hungry.  We hadn’t even stopped to sit down in the hotel lobby after checking in.  I insisted we didn’t.

And here I was trying to convince her that we were walking two, maybe three miles just for the slight chance that we might spot them.

We kept walking.  We didn’t talk for about half a mile.  Not until I saw the neon light of some burger joint another half mile up the road.

So we walked some more.  We passed the El Rey and I snapped a picture of the billboard.

A few minutes later we were standing in the lobby for Entravision, the media conglomerate which serves mostly Hispanic listeners but which also owns Indie 103.1, the station which, according to news I had read on the web the night before, was hosting Silverchair at “lunch time”.

“Do you know what time Silverchair’s playing on Indie today?”

“Bands usually play around one o’ clock.  You can wait in here if you want, they might come in this way.”

I sat down in a posh red sofa shaped like one half of a blown up submarine. Andrea went downstairs to find some food.  I took out the phone and called a friend.  And then another.  And then maybe three minutes later Andrea came back.

“You’re gonna’ want to get off the phone.”

And then they were walking past me.  Paul Mac I recognized first.  Then Chris Joannou. Daniel Johns.  Ben Gillies.

They walked right by me and I didn’t say a word.

If you’ve been following the nu crew for a while, you’ll know that I missed them the last time they came to the US.  Eight years I’ve been trying to see this band.  And yeah, we had tickets for tonight’s show.  Exciting enough, of course.  But here the band was, right in front of me, no other fans around to steal the moment.

And I didn’t say anything.

And then Paul Mac was gone, through a door we couldn’t follow.  And then someone who I suspected might be Julian Hamilton.  I was gonna’ miss my chance.

And then Andrea saved it.

“Can we steal you for a minute?”

Ben stopped and looked at her.

Chris and Daniel followed Ben’s lead and stopped moving. I stayed right where I was on the couch.  Mouth probably agape in a rare moment of fanboy shock.

“Can we steal you for a picture real quick?  We just flew 400 miles and walked eighteen blocks!”

Ben smiled at her.

I hadn’t wanted to be rude.  They were carrying gear for the set they were about to play on Indie.  Daniel looked slightly bug eyed in his stunna shades. But Chris was smiling. I hopped up off the couch.

And then I was introducing myself and my wife to them, shaking hands, asking if their manager John was with them.

After that I didn’t really know what to say.  I imagine you never do in these moments.

Chris held his hand out for my camera, which I handed to him eagerly.  He passed it on to the receptionist who agreed to snap a couple of photos for us.  We lined up, he took the pictures, and that was that.

I said thank you a couple of times and added a

“Thanks for coming back to America.”  Ben nodded and smiled.  And they were gone.

We left the building. Had lunch. Walked the two or three miles back to 3900 Wilshire.

And it didn’t seem very far this time.

Maybe because we were walking downhill.

Or maybe it was because we were smiling the whole way back. 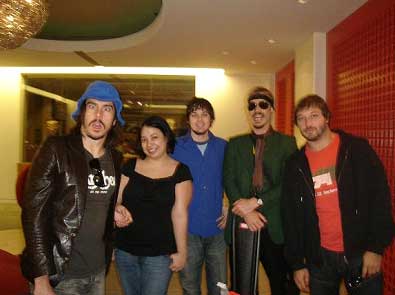 Forget what day it was but I realized about a month prior to getting tickets to the El Rey on the 20th that I had to be up to get them as soon as I could.  Me and My buddy got up early on a hang-over, and went to his house with his debt card to purchase the tickets... Being from Alaska we knew there was a heavy price of a plane ticket to go along with it but that was a small price to pay to see the band we love so much.  We got on 2 minutes after the tickets went on sale, that was 2 minutes too late.....I said Silverchair would never come to the states again without me seeing them, and me and three other friends who all greatly wanted to see them decided we would...  We payed 75 a piece for 4 tickets and had to get plane rides all the way from Ketchikan, Alaska.  Standing outside of the El Rey theater that read on the above sign so grand, it was like we were going to a 1950's cenima.  El Rey was a great thing to see after flying from Alaska, and searching through LA not knowing where to go, but better yet......It said "Silverchair"

When we went in the first thing I did was get my one and only drink because I was not gonna give my spot up for anything.  The Silverchair anxiety started growing even more when the opening band was done and the curtains closed.... I remember shouting AUSSIE, AUSSIE, AUSSIE, OUI, OUI, OUI.... what seemed like eternity flying for so long, getting lost, were were finally at the spot we needed to be....

They started with Without You, which was played better than I can remember, it was when it really hit me that i was finally at a Silverhchair concert.  Next Emotion Sickness hit me like a sickness, I had Silverchair sickness and I wanted it to last forever, Daniels voice sounded so beautiful....The Greatest view was next... Sounded great!  Along with World Upon Your Sholders....  Beautiful... I love how Daniel screamed BURN BURN BURN BURN BURN!

Across the night we recorded on a little hand held video... It was a great version,  I loved how Daniel motioned his arms like wings when he said "sleepless untamed" that put a smile on my face.  Young Modern Station as Dan introduced it was smoking... I loved every minute of it great song.  Ana's song was beautiful.... it was my first time hearing the band live, but it was as wonderful as i ever imagined.

"Set me on fire in the evening, everything will be fine,  lately im a desperate believer, walking in a straight line"  dont have to say more... brilliant!

My favorite Silverchair song of all time Tuna in the Brine.... It didn't have Van Dyke's orchestra, but it was beautiful none the less.  It was a honor to hear it live.

After Luv your life, I decided to yell "We love you Daniel" and he replied "This is so funny"  I guess because I am a guy saying we love him but I waited untill the crowd was not yelling too much and i was near the stage so the must of been what he was trying to say.

Oldschool Chair was next with The Door, we rocked it along with the Midnight Oil Song which is a cool song to do.

I had the tingles during that one! Amazing!

Freak was next and I looked over and took a look at Paul Mac who was on the side of the stage dancing around like crazy!  It was so awesome, I was dancing myself but Paul had the better moves.

After Freak Daniel took a bow, and walked off but we knew that was not the case!  After a few minutes of the chant SILVERCHAIR   SILVERHCHAIR  SILVERCHAIR, they found their way back onstage where we heard the first opening notes tapping like raindrops... It was If You Keep Loosing Sleep....and it rocked my world... It reminded me alot of Queen, but more Chair than anything... good job boys!!!!!!

The Lever was a great closer... when Daniel threw his pick it landed right by my feet, i wasnt quick enough to grab it... but i took a extra 10 minute search to make sure someone else did... I just got back home yesterday, and It was so much worth the trip..... When the Chair comes back.. you can bet i will fly again...