About 2 ½ years ago things wee looking grim for Silverchair.  Daniel Johns had made it clear to management he wasn’t planning to record with the band for some time – and I remember speculating in this column whether the band might split permanently.  I’m so glad I was wrong.
Inside the Gaelic Club on Thursday night, where Silverchair were performing under the name Short Elvis, there was a sense of awe that the band were back on stage, delivering one of the best sets of their career.

The Short Elvis gig was a low-key, intimate show designed to get the band back in gear ahead of some larger scheduled performances, including the Great Escape festival in Sydney next month.  We promised the band’s management we wouldn’t review the concert itself – and Silverchair’s new tunes – because this was simply a warm-up show for the band.  Well, blow me down if this wasn’t the best Silverchair concert I’ve seen since they wee performing as 15-year-olds at the first Homebake festival in Byron Bay.  So it’s hard not to tell the world about it.

The three Silverchair musicians – Daniel Johns, Ben Gillies and Chris Joannou- were at their sweaty, sexy best on stage, reclaiming the riotous joys of rock ‘n’roll with spirited guitar solos and powerful drums.  They were joined on stage by an honorary fourth member, Paul Mac, who merrily bounced away at his keyboards in a Yoko Ono t-shirt, a humorous nod to his role in taking Johns away from the band for the Dissociatives project.

But it was Johns who left fans astounded, simply because he was enjoying himself so much.  Smiling constantly, laughing with his bandmates chatting and joking with the crowd, Johns was at his exciting best as a frontman, although he kept apologising for “not knowing how to do it anymore”.

At one stage a fan urged the band to play something from Silverchair’s 1995 debut album Frogstomp. But after delivering a mesmerising new track, which prompted a massive roar from the crowd, Johns laughed and told him: “You don’t want anything from Frogstomp anymore, do you mate?  You’ve just seen the future”.

Corey Diffin 22, Mosman “They never disappoint. They seem to be able to reinvent themselves so successfully.  I’ve been following them since I was 12.”

Tracey Sherwood-Jones, 22, Central Coast “They were great, back to their rockin’ best.  Daniel looked so healthy and Paul Mac was very comfortable with the rock stuff.”

Adrian McGruther, 22, Bondi “It was great, a lot more diverse.  A big step from Diorama.  Daniel has got renewed energy;  he’s smiling a lot.

Elizabeth Tiamzon, 27, Winston Hills “I liked the new stuff especially – it’s got more beat and bass.  It was weird seeing Paul Mac intereact with the others, but it blended well. 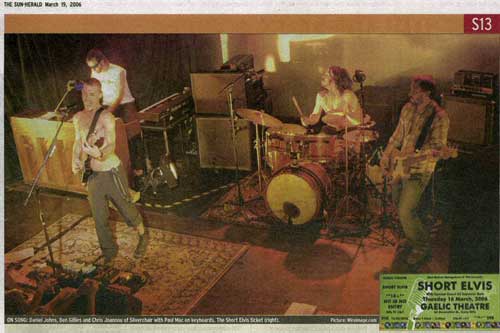