Silverchair Eases Back Into Full Cry

By Cathy McCabe (The Daily Telegraph)

As far as Daniel Johns is concerned, every time Silverchair plays a gig or makes a new record it's a comeback.

The group made a triumphant return to the live arena at a low-key warm-up show in front of 700 "mates" and fan club members at Sydney's Gaelic Club last night.

It was their first show since last year's WaveAid tsunami benefit.

That outing showed Johns, who has battled eating disorders and viral arthritis, was not only healthier but at the top of his game as a rock frontman.

Johns, bassist Chris Joannou and drummer Ben Gillies spent most of the summer writing and rehearsing new material at a Hunter Valley winery and a Sydney studio.

The warm-up show - the band stressed it was not a proper concert - helped prepare Silverchair for three major performances in the next month. These culminate in their headlining slot at the inaugural Great Escape festival at Newington Armoury at Easter.

"It's been at least five years since we've been able to do a show like this. It's going to be great to play in front or our mates," he said before the show.

Last night's show was also part of the process of re-igniting Silverchair which Johns, as the band's creative controller, chooses to hibernate each time they finish a new album and tour.

After the band completed the Across The Night tour in 2003, Johns formed The Dissociatives with mate and occassional collaborator Paul Mac.

Gillies formed his own side project Tambalane and Joannou co-produced The Mess Halls' album.

Johns said the band planned to start recording its fifth album mid year and release it later this year. 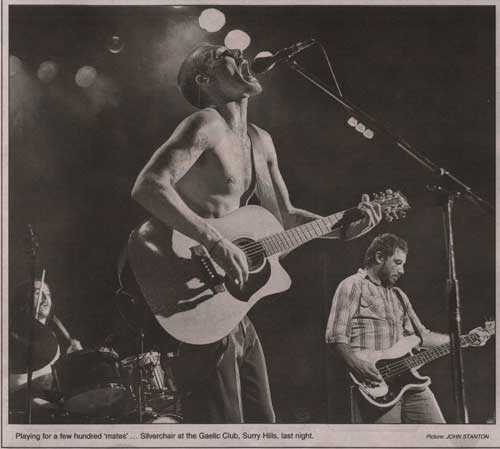