We are the Kings of Comeback

By Kathy McCabe (The Daily Telegraph) 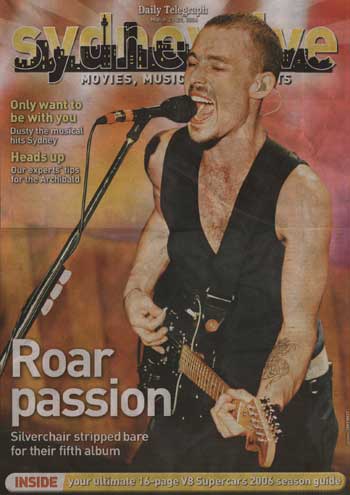 In a blow to conspiracy theorists, Silverchair are very much together and planning their fifth album

Silverchair are rocking out big time on the small stage, It’s oppressively hot in Sydney’s Gaelic Club as 700 adoring fans and friends bear witness to the long-awaited return of the band.

Despite all the nerves, there is no apparent rustiness as the band blitz through a set drawn heavily from Diorama and introduce new tunes from their upcoming fifth album.

As the bare-chested frontman said to the persistent fan who requests their old hits: “Mate, you’ve just seen the future.”

And it is a bright future indeed.

Daniel Johns, Chris Joannou and Ben Gillies have been dogged by recurrent speculation they were no more since they finished the Across the Night tour in 2003.

Those who are close to Johns – the band’s creative controller as chief songwriter and co-producer of their albums – are used to hearing him say each Silverchair album would be the band’s last. When he formed The Dissociatives with good mate Paul Mac in mid 2003, the conspiracy theorists wer adamant that it was the end.

While Johns, Mac and their mated from The Presets – Julian Hamilton and Kim Moyes – toured Australia and Europe with The Dissos, as they are affectionately known, drummer Gillies took acting classes and formed his own side project, Tambalane. Bassist Jaonnou went behind the scenes, co-producing The Mess Hall’s Notes From A Ceiling album with Matt Lovell.

The seed for the trio to “reform” was sown by the WaveAid tsunami benefit last year. Johns laughs at the irony that the most terrifying gig they have ever done was the trigger for them to foge ahead with plans for their fifth album.

“That’s why we are doing this warm-up gig,” he says, an hour before heading to the Gaelic Club for soundcheck. “With WaveAid we got the call, had two rehearsals and the next thing we know we’re on stage. To tell you the truth, we were freaked out. All of us were so scared.

“We’re all looking at each other thinking, ‘Why did we say yes?’ We should have just donated some cash.”

Why did they say yes? For the same reason that Johns cannot fully explain what continues to draw him back to Silverchair.

He shakes his head with almost disbelief as he considers he has been playing music with Gillies and Joannou for most of his life.

“Me and Ben, we’ve been playing together since we were eight years old and Chris started playing bass with us when we were 11 or 12, so I’ve been playing with these guys for most of my entire life, not just my adult life. Everytime we come back together, there feels like there is a possibility we are going to lose it, whatever it is we have. We want to maintain it, keep it going and you can only do that by playing together.

“When I was touring with The Dissociatives, it made me appreciate what I have with Silverchair. And vice versa.

“It’s not hard being away from them but I think we all miss it after a while, we miss playing together. They are like my brothers.”

Silverchair are in the unique position of being able to rewrite the rock’n’roll rule book – again – for their fifth album.

But the trio and their management have decided they want to do this album on their own. To raise the cash to fund the recording, the band signed on for three big gigs – The Rockit Festival in Perth last weekend, the Clipsal 500 in Adelaide this weekend and the Great Escape in Sydney at Easter.

“50 per cent of doing these shows is the fact we are doing another album and we need to connect again and take the band beyond where we were last time,” Johns says. “And 0 per cent is we don’t have a record deal and we want to pay for everything ourselves and have no external pressure from American A&R [artist and repertoire] guys who don’t know what they think they know. There aren’t many bands in our situation, who can play three gigs and pay for our entire record. We know we are very, very lucky.”

And maybe Johns knows that they have the record of their career coming. Why shouldn’t the band enjoy more of the spoils of success?

Fans at the Gaelic Club gig – notwithstanding the bloke who wanted to hear their debut hit single Tomorrow – are still buzzing. The Man That Knew Too Much, Straight Lines, Sleep All Day and Mind Reader drew deafening roars from the crowd. “I want us to ve the band with the most comebacks,” Johns laughs.

“There’s something we’ve got, that every time we get back together, we connect straight away. It’s not comfortable, it’s unnerving and that’s exciting.”

*The Great Escapeis at The Newington Armory from April 14 to 16. Day passes and three-day camping tickets onsale from Ticketek and Moshtix. 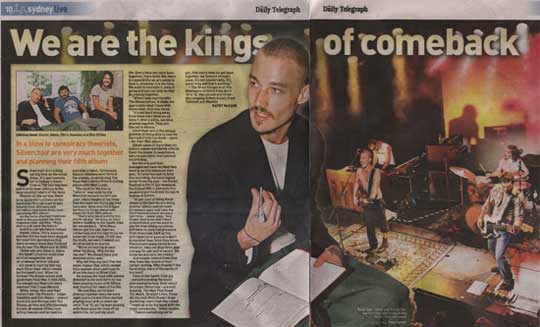