By Lauren McMenemy (The Advertiser (Adelaide)) 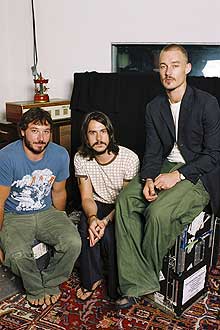 LET'S get the obvious out of the way: Silverchair never broke up. They told you they weren't breaking up, but you didn't believe them. They were simply "on a break" as they pursued other interests for a while. You have to remember, these guys had been in a band together since they were 12 years old. They needed time apart.

Now Daniel Johns, Ben Gillies and Chris Joannou are "excited" about playing music together again. It's been almost three years since the last national tour. It is time.

Just don't call it a comeback.

"I don't think there's been another band in Australia that's had four comeback albums," laughs Johns, relaxed and ready to hit the big stages once more.

Joking about how massive the Chair's "comeback" is, Johns has a theory about how the first gig will go: "It'll be an absolutely huge stage in the middle of the desert," he dreams.

Yes, Silverchair is making its "comeback" post-race in Adelaide. The gig comes just over a year after their WaveAid performance, the one which whet their appetite.

During Silverchair's "break", Johns had collaborated with dance guru Paul Mac in the Dissociatives, a cartoony band which made tripped-out pop music and won over the critics. Gillies last year released a record with Tambalane, a '60s-style classic pop band that had an indie hit with Little Miss Liar. Joannou, on the other hand, went behind the chair, producing for the likes of the Mess Hall.

"I think no matter what they've been involved in, every single musical decision that a musician makes is vital to the development of that artist," Johns says. "After having time apart, I've noticed Ben's drumming has changed and I find it a lot more inspiring to play to. I guess everyone's just got a lot more confident with what their role is in this particular band. Everyone in the band really knows what the job is and where our strengths are and what we need to do to keep developing as a band to get better and never get stuck. I know in order to make records that I'm proud of and things that I will stand by when I'm 20 years older I need to go into it with 100 per cent commitment and know that my heart's in the right place. Before the Dissociatives album, if we had've just gone straight in and done another Silverchair album, I don't think I would've been 100 per cent in it. Whereas now I really feel like I'm ready to come out and be bigger than U2 and the Rolling Stones combined. If you're going to come back, make it worth your while," Johns laughs.

It's a fair call though. For a time there, Silverchair was Australia's biggest band. Massive overseas success on the back of their debut, Frogstomp – released when they were just 15 – had them pegged as the bastard child of Nirvana and Pearl Jam.

By the time they released Diorama in 2002, things had changed dramatically. Johns's musical palatte had expanded.

And then the break.

"A lot of people thought when I did the Dissociatives record that Silverchair had split up. I tried to make it obvious that we hadn't split up but I think that was the more interesting story," Johns moans. "So I guess this record's going to be called a comeback record even though we just wanted time apart to go and make music with other people for a while and then come back together when we're excited about playing together as opposed to just milking the cow dry and then eating the jerky that's left over.

"We needed to have some time to let the cow that is Silverchair renew its flesh and stock up on milk again so we can go back out on the road for the next two years and mean it instead of get out there and six months later want to go home and write a record with someone else."

So now Silverchair is playing live again. They'll head overseas in May to record album No 5; we should see it at year's end.

You can call it what you like. What matters is Silverchair is back in the building.