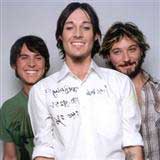 If there were any doubts Silverchair weren't back to their full potential, they evaporated last Friday night when the trio played a glorious set at Sydney's Great Escape festival. Adding some spark to the very relaxed festival atmosphere, the band (plus Paul Mac on keys) ripped through an hour plus set which featured classics like 'The Greatest View', 'Ana's Song', 'Emotion Sickness', 'Without You' and even 'Freak' nestled alongside newer songs which sounded pretty damn good.

A jovial and very animated Daniel Johns talked about risking their "credibility as a band" before launching into the ballad 'Across the Night'. Later, he sculled a beer on a dare from the audience. They closed the show raucously with Johns throwing his guitar into the drums. It could be a while until we see the Chair onstage again - they've said they plan to return to the studio to finish their fifth album before touring again.