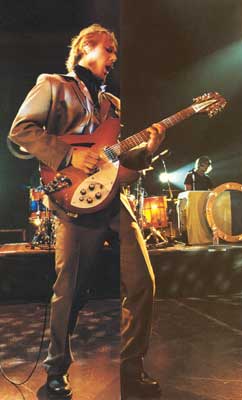 Everything about this evening’s show has the words ‘major’ and ‘event’ stamped all over it. Unless you’ve spent the last couple of years in an all-consuming nu-metal haze, you will know that Silverchair’s chief songwriter, guitarist and frontman Daniel Johns has been incapacitated with reactive arthritis, a disease that can take years from which to recover. The result of this illness-enforced absence was that the band’s fourth album, ‘Diorama’, which boasted a major orchestral change in sound, was released nearly a year ago without a single gig to support it. In fact, Silverchair haven’t played the UK for around four years, the last time being a handful of dates in support of 1999’s ‘Neon Ballroom’.

Now, however, a European jaunt is culminating in a four-night, sold-out residency at Shepherd’s Bush Empire. The venue is so tightly packed that literally no-one can move in the stalls when Danish band Nu appear onstage and shimmy their way through a 30-minute set of spiky pop-rockers that bring to mind punkier Blondie. This is no small part down to their rather fetching singer, Stine Jacobsen. She shakes her blonde locks and jiggles on the spot in exactly the same, captivating way to every single song. Nu sound and look great, but their sunny presence seems rather at odds with the headliner’s well-established melancholy style.

When Silverchair finally materialise we could so easily be at a Westlife concert; the degree of adoration directed at the stage, in particular at Johns, is so heated it’s a wonder the PA can be heard over the screams. Wearing a fawn-coloured suit and cravat, and sporting a dubious experiment in fuzzy face furniture, Johns sits behind a set of keyboards amid a stage set fragrant with the smoke of joss sticks. He tinkles his way through ‘After All These Years’ like some thrift-store Elton John playing to a sea of upheld cigarette lighters, emphasising the more mature aspects of his recent musical paradigm shift.

The intention now, clearly, is to use their period out of the limelight to distance themselves further from their youthful experiments in Nirvana inspired grunge, and usher in a new era of more considered and crafted songs.

While this change may come across as occasionally indigestible on record, in a live context Silverchair can’t stretch to an entire orchestra. Rather than achieving epic grandeur through sweeping strings, the band go for something far more preferable: they jam in classic style, blasting through economical, powerful segments of guitar and keyboard elaboration. And it’s during these segments that they truly, surprisingly, come alive. Johns indulges shamelessly in rock star posing and hip-wiggling, like some Elvis-besotted teen miming in front of his bedroom mirror; bassist Chris Joannou stomps dementedly on the spot; drummer Ben Gillies somehow manages to keep time without losing his pork pie hat.

The image of young lads old before their time conjured up by ‘Diorama’s MOR pretensions is shattered by the grunt of raw, rock-lifting newies ‘Tuna In The Brine’, ‘Without You’ and ‘Luv Your Life’, the latter cheekily dedicated “to all my ladies”. And anyone expecting old tunes is destined to be disappointed because the furthest back they go is ‘Petrol And Chlorine’ and ‘The Door’ from 1997’s ‘Freak Show’. The performance finishes with Johns again behind the old Joanna for ‘Asylum’, followed by an extended run through ‘The Lever’.

Naturally, present to watch the band hit their stride again was none other than John’s other half, Natalie Imbruglia. “It was amazing! The crowd was amazing! Couldn’t you tell?!” whooped the lollipop-sucking pop elf when asked for a post-gig comment. Indeed, if tonight is a fair indication, the remaining residency shows will have also proven to be incendiary affairs. And let’s hope the next album captures some of the pure energy which this band clearly still command live.