If a great producer is one that is technically proficient, unconventional, and is capable of coaxing the very best out of the artist, then Dave Bottrill is one of the best around. Christopher Holder learns more about the art of production.

Starting your professional career in Daniel Lanois' Canadian-based studio is not a bad break to get. Refining your skills with a nine-year tenure at Peter Gabriel's Real World Studio could probably constitute the perfect 'apprenticeship'. This is exactly the career path that Dave Bottrill took in the 80's and 90's before striking out on his own producing and engineering bands and artists such as King Crimson, Fuel, Nigel Kennedy, dEUS and many others. Dave was recently lured to Australia to produce the latest silverchair album. I caught up with the man at Sydney's Studio 301 for a chat before another hard day's recording. Rather than asking Dave to simply run through the signal chains of his silverchair sessions I thought I'd gain more of an insight into the art of production and how his time at Real World influenced his approach to that art.

Christopher Holder: How fundamental an influence was your time at Real World?
Dave Bottrill: It introduced me to styles of music that I never would have had an opportunity to hear. The fact that Real World Records and WOMAD were based there meant I was exposed to a huge variety of world musicians. And the throughput was incredible - because most of the artists' budgets were so tight we were making records almost daily. It was great. Not only did it introduce me to those genres of music but it also meant that I had to learn to work very quickly.

CH: I imagine in that sort of environment with those sorts of schedules you really had to rely on some solid back-to-basics engineering skills?
DB: Yes, and it also taught me how to work flying by the seat of my pants. When you are in a situation where there's 20 musicians in the room and they all want to be recorded and hear themselves differently you learn to move very quickly - to easily assess who needs what. A case in point was the 'Recording Week' project that we occasionally conducted at Real World. It brought together all the artists who were touring with WOMAD at the time (as well as others we were excited about) along with various producers from around the world to record and collaborate - it was great fun. In the studio at any one time there'd be traditional musicians, dance producers and DJs, rock producers… a huge variety of disparate influences. The idea was simple: throw people together and see what happens. I found it to be one of the few remaining environments of sheer creativity - there was no way of predicting what was going to occur but we'd try something just to see what would come out of it.

CH: Sounds like a very fertile and creative environment.
DB: Very fertile. And such fun. You get to work with all sorts of artists who can't even talk to each other but musically you find there's all manner of common ground. As an engineer it really tested my ability to get that down, get that recorded, get the musicians happy with their playing and happy with hearing back what they're playing - when they're hearing some exciting sounds coming back, that's a source of inspiration in itself.

CH: How would you handle monitoring in those circumstances?
DB: Well often you'd just monitor and record with the speakers on. That way you capture the excitement of the rooms as well as the music. Sure, isolate what you can, but the emphasis is more on performance and compositions rather than on the technicalities of isolation, and chasing a pristine recording. I mean, if you get a good recording of a great performance it's better to do that than have an excellent recording of an average performance. 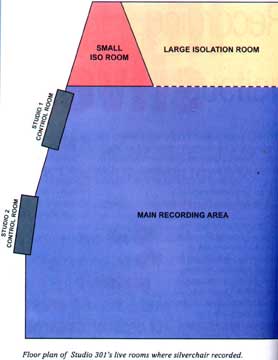 CH: And is that a credo you've taken with you since going freelance?
DB: Yes, the way I try to work is to encourage performance in any way that I can, by using all the tools available. Take the example of my work here with Daniel [Johns, lead singer of silverchair]. Something that I've learned in the past few years involves using the computer as a tool for looping up choruses or verses so that the vocalist can sing without having to wait and think, 'oh they're winding the tape and hitting record again… and hitting record again' - you get more into the zone by just looping sections, allowing them to perform without constantly stopping and starting. Anything you can do to encourage people to perform will greatly enhance the results. That might mean giving them a great headphone mix or allowing them to record in the control room… it could anything. For example, we bring in [silverchair's] Chris Joannou to play bass in the control room here at 301. It felt a lot better for him to be in a room with the excitement of the monitoring going. Or, sometimes I bring in percussion instruments into the control rooms so that when somebody's doing an overdub you have this funny, naïve technique of playing shaker while someone is overdubbing - that way he or she doesn't feel like they're under the microscope and playing by themselves. Musicians generally like playing with other musicians and sometimes a technique like that will work wonders.

CH: I was recently listening to Peter Gabriel's Us album which you engineered and mixed, and the sound quality of that album is brilliant. Is that the sort of pristine separation and sense of dimension more of a function of the way in which the sounds were recorded and captured, or more about the production/mixing technique?
DB: It's a result of all those factors - they're inextricably linked. But what's hugely important (and what I alluded to earlier) is the capturing of performance by developing the atmosphere in the studio. If you can do that while you're making the recording then the musician is inspired and will add to that atmosphere and to that depth with their playing. Again, it's like the idea of putting people in the control room to record - if you have the speaker turned up while they're playing, and there's a depth there by using the right reverbs… they feel like they're inside the music, within this whole environment, and they can get inspired that way. In short, for me it all comes down to the performance of the person. If that's not right, then no amount of depth or dimension in the production and mixing is going to enhance that anymore than it can be. But if the performances are great… well, anything's possible. For example, at the moment Daniel is singing up a storm. He's really at a point where he's singing in an excited way and the results are amazing. We did a rough mix of a song that we were working on last night and he's just so inspired by that. Because, don't forget that the process of recording can involve four or five weeks in the studio - it's a long time - and there's nothing worse than having a bored musician on your hands. What I aim to do is keep the musicians inspired during that time by throwing a few 'curve balls' at them. By which I mean, put them in situations that they're not used to, situations that will bring a new level of excitement to their work. And if they're feeling good and they love what they're hearing back, then you're going to make the process of making that record so much easier - they'll perform better, the melodies they write will be better… the songs will be the best they can be.

CH: What's a few more examples of these 'curve balls'?
DB: Well, when Daniel was in the control room recording his guitar solo we had the lights off and I grabbed a lamp and started flashing it around underneath him - almost like he was on stage. It was something to make him think, 'wait a minute, what's happening here', and to get him inspired. Or, if you're doing some vocal overdubs, maybe do some wild level balance changes or wild pannings. Do anything that stops the performer from feeling like they're going over and over the same thing again and again. Make them feel like it's a constantly evolving and dynamic process, not a static one.

CH: You mentioned the rough mix for that silverchair song. How important is rough mix during recording to give the band an eye for the goal?
DB: Very important. And do different kinds of rough mixes. We're certainly doing that here for the silverchair album. We've got Van Dyke Parks in to do some orchestral arrangements for a number of the songs and I'm doing various rough mixes with those arrangements. At one point I'll do a mix of just voice and orchestra, just to hear what it's like and feel how the song sounds in that incarnation. It's just a matter of keeping things fresh and giving the band a new perspective. For example, massively over compress one mix, or pan everything to the left except the electric guitar on another, or lose on of the main instruments entirely - cut out, say, the drums at one point. Just do anything to see what might happen. Try and create an atmosphere that promotes happy accidents. That's a real Brian Eno technique and by no means an original idea of mine. I learnt a lot from Dan [Lanois], Peter [Gabriel], Brian [Eno] and that's certainly a big one - things you don't expect to happen are often exciting, so it's a good idea to give those happy accidents some space to happen.

CH: When you look back one some of the classical albums you've had a hand in making, there must be dozens of amazing elements and synergies coming together that gave them their appeal. But if you had to choose only a handful of those key elements that make up a great album what would they be?
DB: First up you've got to have great performances.
2. You need to have a strong identity.
3. There has to be a common thread or coherency going through the whole record (having different colours is great but even hugely colourful albums like Pet Sounds or Sgt Peppers have a definite common thread through it all.)
4. You've got to have a good, strong emotion (it's got to move people in one way or another.)
5. And it's got to have depth. (It can't all be there on the surface, you've got to be able to listen to it five times and hear something new - something you didn't hear on the first four hearings - otherwise it's a case of 'one bite and it's over'.)

CH: And how do you achieve these things as a producer?
DB: Hmmm… that's hard to answer. You do it in various ways. You do whatever it takes. You buy a whole lot of candles [pointing to more candles than a pontiff could shake a staff at in the 301 control room]. You turn all the lights off, or you turn them all on! You get the vocalist singing first thing in the morning… It's different for each situation. But the key is, you've got to work to find what's appropriate for that particular project.

For silverchair's Daniel Johns we're using a newer Neumann, the M149 - the new 49. He's used this mic in the past and been really happy with it. We add a little 1176 compression, a little Pultech EQ - just for that sweet top - and a lot of candles!
(Thank you Juliette Remfrey for transcribing the article)