Gigs of the Decade 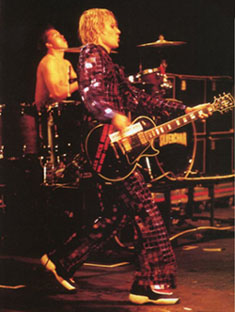 The word backstage was that it was the end. silverchair were going to announce their break-up in-stage at Homebake '99 in Sydney. It would've been perfect: headlining in front of an almost-hometown crowd, Australian pop royalty (including Natalie Imbruglia) clustered at the side of the stage; and a certain pre-millennial apocalyptic tension to the final gig in a fear's incessant touring. Drummer Ben Gillies remembers the break-up whispers. "I heard so many friggin' rumours about silverchair during the year it's not funny," he says of the 1999 Neon Ballroom tour. "'. Even heard Chris (Joannou) was a heroin addict! It was ridiculous. We decided to just ignore any rumours that come up."

But the publicity machine leapt into action on the day, quickly assuring fans that Daniel Johns, Gillies and Joannou, all industry veterans in their early 2os, were just taking a lengthy break. Johns said in an interview that he needed time off to get to a level of happiness where he didn't need to take anti-depressants, time to fall in love with music again. At the first Homebake at Byron Bay back in 1995, silverchair played in the afternoon, looking like kids who should still be rehearsing in their parents' garages. But not sounding like it. Still, half the crowd was pelting the stage with mud and bottles, enough to make you wonder why they came. The band's Australian audiences have long been characterised by this schizophrenic split between adoration and resentment: they've been objects of curiosity and envy, all for being too young to sound as good as they did. But its three successful albums since Tomorrow, Killing Heidi (now covering that song) have taken over Teenage Star duties, and in the meanwhile Johns has transformed himself into a consummate frontman. Strutting onto the stage at Sydney's Homebake '99 in a custom-made purple mirror ball suit, Johns threw up his right hand in a rock salute, swivelled his hips and worked the guitar like he was born with it in hand. The mirror ball suit, which was made specially for Home-bake, was a sensation, "I just looked at that suit and thought 'Holy shit, that's pretty fuckin' cool'," says Gillies. 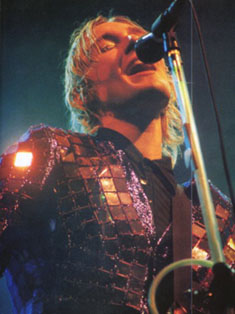 "Daniel wanted something special for Homebake so some dude who makes costumes made it for him. The special thing about the Sydney gig was Daniel kept the jacket on for much longer. He was struggling to move around in it but it was a pretty good effect." After more than 100 Neon Ballroom shows, the band wanted the Homebake gigs to be the best of the year and decided to spend extra money on lighting and effects. "We had done a lot of festivals through Europe during the year so we saw how the really big bands do great light shows," says Gillies. "We spent a lot of time on the lights because we wanted it to be remembered, to be more exciting for the fans." Opening the set with Israel's Son, Gillies ("154 kilograms of glory!" says Johns) pounded away with precision at his kit while Joannou grooved on the right hand side of the stage. Johns' performance was part parody, part pastiche: Like Tim Rogers, he borrowed from several apostles of the post-Zeppelin rock canon, including the southern TV evangelist -"does anyone here believe in God? Say Hallelujah!" Johns was showy, insolent and sexy, but fragile, too. The performance was an exercise in an uneasy irony, treating his audience with the same sort of ambivalence he received from us all these years. Moving sinuously, femininely, he pulled up his shirt for the screams, and shouted: "Alright Sydney, are you motherfuckers ready for rock & roll action?" He told us that he loved us. Hello Shelbyville. 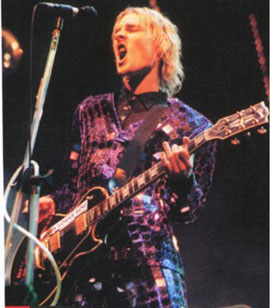 Emotion Sickness swelled threateningly, the classically trainee Holloway (ex-Cordrazine), who was on keyboards for the duration Neon Ballroom tour, handled the Helfgott piano part. As they kicked into part one of the classic chair blueprint that is Slave (parts two three being Freak and Anthem for the Year 2000), Johns and Joannou struck up some tandem bouncing, sending the pit crazy. The audience were friendlier usual - "thanks for not throwin projectiles" said Johns - before dying things down with Ana's Song famously written about his own anorexia. It remains a surprising choice for to have gone public something so personal given his previous reticence about his private life. Miss You Love transformed the Domain into stadium rock proper, from the single spotlight on Johns for the first verse to the ground drench of red in the chorus, slow rock drumming and the rapturous crowd sing along. There was an increasingly visible edge to Johns' performance throughout the night; it felt as though Johns was coming unhinged as he "a little bit of Mardi Gras in my which segued suggestively into "I'm a genie in a bottle baby/come, come, com, come and let me out". Much of this how along with the hallelujah shtick was apparently scripted, or at least not unprecedented. During Freak Johns dropped his extraordinarily versatile voice into death metal roar for two lines, swung into a fey falsetto for the next. Anthem for the Year 2000 closed set, a song in which the irony that apparent to Johns in writing it has 1 less obvious to anyone since. But he everyone shouting "we are the youth over the drums, working the crowd a Vegas trained showman, and the joke clearer. It's on the fans. "We're not supposed to do an encore but we'll do it because we love you" said Johns, as the band were cheered back on-stage. They tore into an incendiary rendition of Spawn Again probably their best song, full of barely restrained tension and power that unleashed into a riot of noise, Johns screaming, "discard the old/in with fashion". Then they left the stage out a look behind. "That show had a special chemistry says Gillies. "It was really the icing the cake for the past six-year's worth. It was a new millennium, it was the end of Neon Ballroom and it had been a really long haul and we all made it, it like a celebration. It's definitely among my top five silverchair gigs of all time.