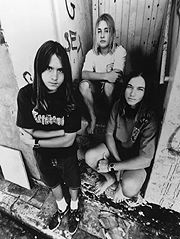 Tired of rockers in bockers? Check out silverchair. The Australian grunge-pop trio offers all the noise without the wrinkles. Daniel Johns, 16, Chris Joannou, 15 and Ben Gillies, 15, just wound up their first American tour, but will be back later this year for a cross-country jaunt, opening for the Red Hot Chili Peppers. The album, frogstomp -- at No. 9 last week -- just went platinum, and their video Tomorrow is in heavy rotation on MTV. But here's the best stat: the three of them combined are younger than Mick Jagger.

[Thanks to Gem's silverchair page for the transcript.]