My friends and I arrived at the Woodlands Pavilion at 3:00 in the afternoon, not really sure what to expect or where to go. So we walked around, checked out all of the T-shirt booths, and went up to the lawn seating to see what was happening. 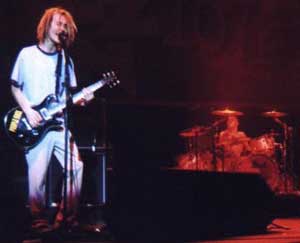 After about an hour, my best friend Georgianna and I decided we were going to get water before we died of heat exhaustion, and then take our places in the pit. While standing in line for water, Georgianna spotted Jarod, one of the Buzz DJs. So we talked to him for a while, then made our way to the front of the venue, to get our yellow bracelets, our pass into the pit.

We stayed in the pit rest of the day, except to get more water, and make our fair share of trips to the misting tent. The amount of silverchair devotion in the pit was unreal. The only ones that remained during the set changes were the fellow chairheads. What a sight to be back in the lawn seating and see the very front row lined with the words "Frogstomp" and "Freakshow"!

Finally, the time had arrived for silverchair to come out, and as Jarod made his way up to the stage to announce them, I turned around and saw every single one of the 13,500 rockin' fans rise to their feet. silverchair made their entrance quickly, and immediately started playing.

The first song up was Slave. Although it really got the moshers going, I thought it sounded rather weak. It turned out they had forgetten to plug in Chris' bass. There seemed to be other problems because Daniel kept looking over and making signs to the sound guys to turn him up.

By the end of the song, everything was fixed, and they went into Leave Me Out, then slowed it down with Abuse Me, in which he introduced Bailey Holloway as "the guitarist for Black Sabbath."

After Abuse Me, Daniel made his first comment to the crowd. It was a simple but effective, "Everybody fucking jump!" Everyone fulfilled his request during Pure Massacre and The Closing, which got everybody hyped up and rowdy.

When The Closing was over, Ben sat down on the floor by his drums, and Chris made his way to the side of the stage. Daniel played Cemetery, very well, but not before saying, "Don't hold up your lighters...thank you." 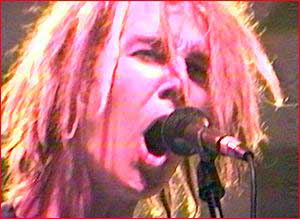 The next two songs were Suicidal Dream and Tomorrow (Daniel changed it to say "The water in Houston, Texas is very hard to drink.")

By this time the crowd was totally crazy, and Daniel sang his Houston song. It went "Houston... is really fucking cool... my name is Daniel... yours is too... look at our lighting guy... his hair is blue. Are you motherfuckers ready to rock? Can I hear a motherfucking hallelujah?"

The rest of the setlist consisted of The Door, followed by No Association, Freak, Madman, Israel's Son, and several visits to the front of the stage by Daniel.

At the end of Israel's Son, the mosh pit was massive, and Daniel repeated his "everybody fucking jump" command, as well as several, "Put your hands up in the fucking air!"

silverchair made a rapid exit, and I heard they left the venue immediately. Although there was still one band left to play, the highlight of the night was over. silverchair had come to Houston once again to show their domination. There was an amazing amount of energy produced by their music, and the band gained a heap of new fans. 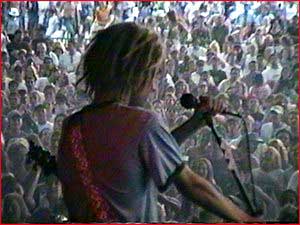 After the intro music (it wasn't the circus music, but something I had never heard before), Chris came out first and he was wearing his blue Bud shirt and tan shorts. Then Ben came out and he was shirtless as usual with tan shorts and an odd-looking mohawk. Daniel came out and was wearing a blue shirt and beige pants, and he had his hair in dreads, kind of like Bob Marley's or the lead singer of Counting Crows. The complete set list was:

Slave
Leave Me Out
Abuse Me (Daniel introduced Bailey as a member of Black Sabbath and people were dumb enough to believe him)
Pure Massacre
The Closing (I was surprised to hear this one -- Daniel messed up at the end and forgot the words)
Cemetery (one of the biggest reactions from the crowd)
Suicidal Dream
Tomorrow ("The water out of Houston, Texas is very hard to drink... you think you can keep on going living like a slut...")
The Houston Song ("Houston, Texas... is really fucking cool... My name is Daniel... and yours is too... yeah, yeah, yeah"]
The Door
No Association (had to be the best song live)
Freak (during the "body and soul" part they stopped playing and everyone sang along
Madman
Israel's Son

They also played part of Suck My Kiss by the Chili Peppers.

The rhythm rang out to a sea of halter tops and cut-offs as the Buzzfest sounded off for the third year in a row. Cynthia Woods Mitchell Pavilion was filled to capacity as 13,500 rock music lovers crammed in to hear the 12-hour music marathon.

"Every year we have been sold out," said 107.5 event organizer Bob Livermore. "The only thing we can do now is make it a two-day event."

Water balloon launchers, water wars and misting tents kept the daytime crowd cool despite a few cases of reported heat exhaustion. "This has always been a well-behaved crowd," Livermore said.

Body surfing, the airborne dance of choice for this crowd got off to an early start when Artificial Joy Club opened the event on the main stage. Another highlight came during the Seven Mary Three performance when water bottles filled the sky in unison. "It was incredible!" said one festivalgoer.

"We are very happy with this year’s lineup," said Livermore. "Every single band playing has at least one or two songs getting national play."