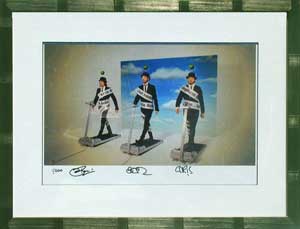 Starting TODAY, the LAS (Silverchair's Official Fan Club) is having its first ever progressive sale. Their beautifully framed limited edition cells from the “Reflections of a Sound” video will be reduced by TEN DOLLARS (AUSTRALIAN) EACH WEEK starting today and continuing for the next eight weeks (unless of course they sell our beforehand!).

For example buy this week and pay $170. Buy the following week and pay $160 and so on (unless sold out beforehand). The advantage of buying sooner, is that you will get the lower numbers which are obviously more valuable and more collectable.

If you buy later, you may get a bargain, but you run the risk of only being left with the higher numbers, or worse still, missing out completely!! 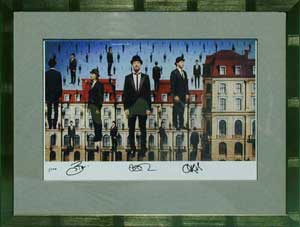 As an added bonus one purchaser each week will be selected at random to received one FREAKBOX that's been PERSONALLY SIGNED BY THE BAND!!!

There was only 200 produced of each cell design, and over half of these have already been snapped up.

These items were produced exclusively by the band for the LAS and there will be no opportunity to purchase these anywhere else.

Want to clarify anything? Email lasmerch@silverchair.net and we’ll try and help.