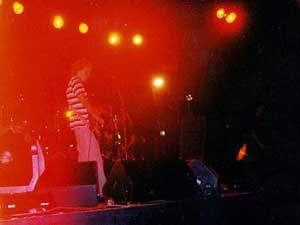 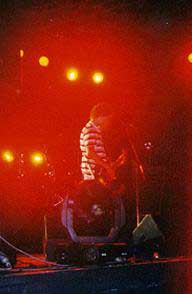 All photos by Julia and Katrina

With this being the penultimate gig at the big shed (thank you Mr Murdoch, there goes another music venue), it seemed strangely appropriate that the Hordern reached sweatbox proportions tonight. 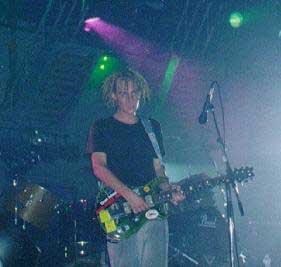 Finally it was time for the 'chair, and with light show ablaze it soon became apparent that the three-piece has become an even tighter outfit over the last 12 months. With a wall of guitars and drums greeting Punterville, silverchair launched themselves into a set that once again proved that, whatever crap people might say, they ARE one of the finest bands around at present.

With Ben Gillies and Chris Joannou providing a wonderfullly impressive bottom end (a small criticism being that at times the drums drowned out everyone else), Daniel Johns launched himselve into the likes of Slave, No Association and a well nasty version of Freak that has become a cornerstone of the 'chair in the live arena.

Pulling it back a gear or two with the likes of Abuse Me and a solo version of Cemetery, it was here that yet another highlight of the night was to be found -- the vocals of Johns.

Sounding more aggressive than ever when required (proving his waif-like physique is hampering the singer little), with Cemetery Johns proved that the dynamics of his vocal chords are still intact, which bodes well for the future of the band. Taking it to extremes during the likes of Spawn and the nothing short of menacing remix of Freak, Johns' on-stage attitude may of changed slightly, but his vocals haven't.

And intact, apart from the at times overpowering rythem section, it was hard to fault silverchair tonight. A very fine rock performance indeed.

[Thanks to Andrew McDougall for the transcript.] 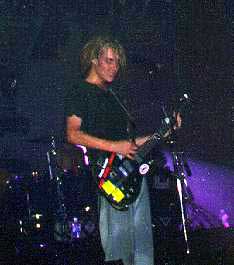 Daniel: "Thank you. Thanks a lot, thank you very much, Melbourne. Melbourne rocks, you guys are so good here. We love it. Oh, yeah, guess what? We didn't realise we were not in Melbourne. This is good old BHP, friendly people Newcastle, and we love you. Here in Newcastle. Rock on! You're supposed to get angry. Fuck! Don't worry, don't even worry about it, that was the whole point. You were supposed to abuse us and then we were supposed to play this song and feel like it had a meaning, but fuck!"

Daniel: "Thank you. I know that we're in Sydney, I was just joking. I wasn't just told then, I really wasn't. What? What? Ah, fuck, it's very hot. We're not used to heat because we're used to being cold, living in igloos in Newcastle on the beach. We live in igloos on the beach and have sex with penguins because that's just what us Novocastrians do. I'm playing this song by myself so if you want to go to the toilet, this is the time."

Daniel: "We're not playing Tomorrow tonight, sorry. So if anyone's got a problem with that, they can try and get their money back. You won't get it, because you love it! We opted for the Minor Threat song because you look like you want to rock. You don't want to sit there listening to a fucking song about some fucking water being hard to drink, all right? So don't fucking worry, and just rock the house. 'Cause that's what we 'chair men like to do, 'cause we have no friends. We're friendless and we love each other, and sometimes have sex amongst each other. Yeah."

Daniel: [after being handed a camera and pointing it at the crowd] "All right, all smile. How do you take it? All right, ready? Turn that stupid light off! Yeah, that's the one. [talking to lighting director Hugh Taranto] Hugh, do something special! Yeah! [he takes a photo] All right! You look awesome! This is the last ever full-sized Hordern Pavilion rock show, because some rich cocksucker's gonna take over. No, just kidding, just joking! Oh fuck. You know how sometimes you just say something and then go 'oh fuck.' I've done that before. Oh, no."

Daniel: "Thank you. All right, just wait. This song is about animal liberation and is dedicated to Adelita and anyone who loves animals."

Daniel: "Thanks for bringing us here and Magic Dirt for playing tonight."

silverchair's Daniel Johns ventures to the floor in front of the stage during the Freak remix at the Hordern Pavilion, Dec. 6, 1997 [Photo by Julia and Katrina]

With Daniel Johns climbing the speaker stack to the chants of the well worked-up crowd, the lights seemingly all directed at this thin blond in baggy jeans and old T-shirt, someone not a million miles from the inner workings of silverchair inc laughed and said: "There's a bit of Barnesy in everyone." 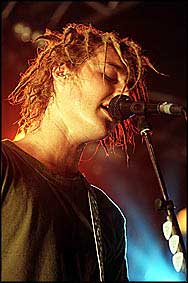 The clean-living Johns, who certainly never saw Cold Chisel at their vodka-guzzling, venue-trashing peak (not unless Chisel, who put out an EP called You're 13 You're Beautiful and You're Mine, played kindergartens) probably would be horrified to be compared with the man whose band defined the Aussie pub band era. It's one thing to cover proto-punks Radio Birdman, as silverchair did two years ago, but please, there are limits.

What Johns's clambering did do was to complete the picture of a band almost unrecognisable from that which we first saw looking stunned into silence or monosyllabic mutterings before large crowds. Even a year ago when they stormed their way through shows at the Metro there was something held back by Johns and bassist Chris Joannou, even as drummer Ben Gillies let loose his best John Bonham drum pounding with his shirt off and his hair flying.

Now, with a crowd of about 6,000 baying for blood, Joannou -- the most improved player -- prowled the floor with deliberate intent, sometimes playing his guitar slung so low that he risked gouging the ground, other times wielding it so casually it could have been a cardboard cut-out.

Johns, meanwhile, chatted to the crowd, joked -- at one stage announcing his solo spot with the ballad Cemetery by saying "I'm playing this song by myself so if you need to go to the toilet now's the time" -- and then finally ditched his one-time security blanket-cum-barrier guitar and began his climb up the stack.

While this may be the first "stadium" tour of Australia for the Newcastle trio, there is a confidence at play here which is both appropriate and overdue. There were times on Saturday when silverchair genuinely seemed capable of shoving aside Adelaide's Mark Of Cain as the heaviest band in the country. The rumbling was low, sometimes brutal and devoid of frippery, their choice of covers -- a flaying version of pre-Fugazi outfit Minor Threat's eponymous song -- similarly unflinching.

While their second album, Freak Show, canvassed a variety of styles -- from Jimmy Page flourishes to string and brass additions -- they have refined and refined their live performances to their bare essence. For example The Door, a Zeppelin-influenced favourite, was like a dancing bear: graceful and rhythmic in a way but such a heavy tread; Pure Massacre, so primitive now but revelling in it; Freak, a two-handed whack to the jaw.

You can argue the merits of aiming for the title of heaviest band around when the band members have such variety at their disposal now, but you can't argue with silverchair's candidacy.

Anyway, there was hope for something else next time around with their set closer, a live version of the Paul Mac remix of Freak -- all rhythm and beat with Gillies on percussion, Joannou pulsing and Johns growling, yelping and crooning the few words. It left some of the sages of electronica behind as wimps and still packed a dance floor punch. Let's see Barnesy and the reformed Cold Chisel try that.

By LISA SATTLER and KATRINA SHERIDAN

Well, last night we saw silverchair for the first time in Sydney. It sure was an experience! The boys were very energetic and they put on an excellent show. 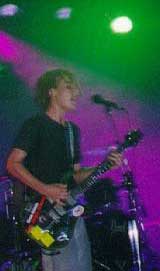 The crowd was so responsive, we could hardly hear Daniel singing Abuse Me. Before Spawn, Daniel announced that he, Chris and Ben had no other friends, that they were a "no-friend band" and they have sex with each other. Chris gave Daniel a sideways look.

During the Freak remix, Daniel climbed the scaffolding, and jumped off it back onto the stage. He also ran in lots of circles before climbing the amps. The remix was sung really well.

During Abuse Me, Ben wouldn't stop grinning. We think it was because of the crowd singing louder than Daniel.

During Cemetery the majority of the crowd were either crying or had tears in their eyes -- we were bawling! It looked very much like Daniel himself was crying, because he wiped his eyes and looked very sincere.

Daniel also announced that they weren't going to play Tomorrow because he was "sick of fucking singing about some fucking water being hard to drink."

Daniel sang Minor Threat much better than Jeremy from the band Handsome on The Door single.

During No Association Daniel went off! He fully looked like he was having a fit. His dreads still look unreal and Ben's mowhawk has gotten much taller and more defined. Chris just kicked butt on his bass, especially in The Closing.

Overall, the 'chair performed perfectly and the crowd was ecstatic with the quality of their performance.

After a long wait outside for security to open the doors of the show grounds up we finally got in at about 6:40 p.m.

At 7:30 p.m Lantern came on, who were the first support act for the night. They played for about 20 minutes, and it was clear everyone just wanted silverchair. Magic Dirt then came on and played for awhile. They were pretty good! 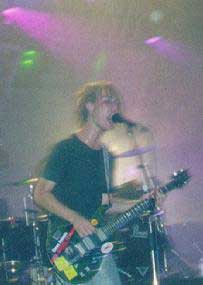 After Magic Dirt we had a long wait while the stage was set up. Every time someone walked across the stage everyone would go crazy and start screaming! All we wanted was silverchair.

silverchair came on in the dark and started with the chords to Slave, which then broke into Roses. Everyone went wild, with a big mosh starting straight away.

Daniel had his newly acquired dreads, which looked cool, and Ben had got a mohawk again. Chris looked like he had had a trim but not much else. Before they continued Daniel thanked Magic Dirt and Lantern for performing.

They played both versions of Freak with Daniel climbing all over the speaker and stuff, and being really active during the techno version.

Before Daniel sang Cemetery he said, this is not exact, "I'm going to sing this one by myself so if you want to go to the toilet, this is the time now."

No one left. He then went on to sing a really good version. silverchair didn't play Tomorrow which lots of people were annoyed at but Daniel did apologize for it.

"We won't play Tomorrow tonight, and if you're not pleased you can go and try get a refund."

Daniel wasn't as talkative as he has been at some other shows but it was still excellent. The coils they had up for Freak were so cool, and added to us getting hyped up.

They left the stage, with everyone waiting for them to come back and they did with a the long version of Israel's Son, which was definitely the best of the night.

silverchair put on the best performance, and have improved so much since I last saw them in April. The concert was definitely worth seeing and the people who are yet to see them are in for the show of a lifetime.