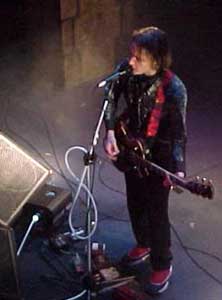 After a six hour drive from Wisconsin we made it to Minneapolis. We got to the Quest about four hours before the show. We sat and talked to the other three people that were there. I didn't know what to expect this time seeing them. After about two hours of waiting, they kicked us out, and as I walked out I heard silverchair rehearse "Spawn Again." I didn't hear Daniel sing though.

When we got in I rushed to the front row and grabbed on to the wall. Grinspoon came out. The music kicked ass, but the singer was TRASHED! He kept saying, "Cheers! Cheers!" They put on a pretty good show but when Lit came out I wanted to puke! The music sucked! The singer sucked! I hated them. Enough said.

silverchair came out and Daniel looked sick. He didn't really get into "Israel's Son" and after the song he stumbled around as it he were about to pass out. Next, they played "Emotion Sickness" which was much heavier then the album version. Again, Daniel kept stumbling around and at the end of the song he looked like he was crying! I was suprised to hear "Abuse Me" next. Great song, but Daniel still was acting weird. No energy into the show. When they got to "Ana's Song (Open Fire)," Daniel looked like he was ready to fall over but continued on.

During a break in the song, Daniel screamed the words "I hate you, I fucking hate you"(not in the mic, but to himself). I was confused to say the least.

"Suicidal Dream" soon followed, and toward the end where he screams "My suicidal, suicidal...," it was like he got a burst of energy. Then after that he seemed like he was fine. I won't got through all the songs but a few highlights were when Daniel said, "Ok, were gonna try something here, I'll give everyone two hundred bucks if, on the count of three, stay as fucking quiet as possible. Ok, ready? 1… 2… 3... YEAH!!!" It was amazing! Not a voice in the place said a word. Then he said, "Minneapolis, you've just help us accomplish one of our biggest goals." (BEN HITS THE DRUMS HARDER THEN ANYONE I'VE SEEN!)

During "Pure Massacre," a girl came up to me with an LAS shirt on and asked if she could take my spot in the front show. I gave it to her just because she flew in from France to see them.

Another highlight was when Daniel said, "Ok, listen. We spent several fucking hour signing hundreds of CD covers and it was all for you. They are fifteen bucks over there." I cruised over to the T-shirt stand and bought a signed copy of the album. After Anthem they left. I started screaming, "SIL-VER-CHAIR, SIL-VER-CHAIR" and soon after they came out and played "Satin Sheets" and an awesome version of "No Association."

The show was so AWESOME!!! I gotta see them again, SOON!!! I just wonder what was wrong with Daniel though.

Tuesday, March 16th was one of the best nights of my life! Seeing silverchair was like a dream come true. 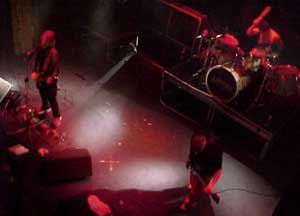 First on the stage was Grinspoon. They were were pretty kick ass except the lead singer came out thinking he was the shit which really wasn't cool. There music was so good though it didn't even matter. They played a song that I've heard on the radio called Post Inebriated Anxiety which you gotta hear. The crowd wasn't getting into it right away. There was a few moshers in front of me but it wasn't that bad yet.

The people seemed to like Grinspoon A LOT more than Lit. When Lit came on stage they kept on saying 'blah blah blah you've never heard of us buy our record call 1-800-DIAL-MTV for us.' It's like they just wanted our pity because they're a new band. Someone threw a condom on stage and the lead singer tried to throw it back out and it went like two inches. That was funny as hell. Then he took his shirt off and started singing again. Nobody really liked him and they were mocking him and yelling "you suck!" and "fag!" But they did kind of suck.

By then you're hot as hell being in a club smooshed together waiting for the main event... silverchair!!! It seemed like forever to wait and see them. Then all of a sudden all the people from the back started coming in to the floor. It was so packed in there. When Daniel came on stage he looked very good. He had glitter around his eyes and wearing a really cool suit.

They played a few songs and by then I was pushed back more. Then they played Abuse Me which is my friends favorite song and when they got to the harder part of it right before Daniel said, "You guys better jump" and whoa! It was so incredible, everyone was jumping finally and having a great time. It seemed like Daniel was having a good time 'cause we were such a great crowd.

At one point we were all supposed to be quiet at the count of three and as amazing 'cause we all were! He promised us a two hundred dollars, which we never got! Soon my friend and I got sick of being far from the stage so we rammed our way up front…way front. My friend was like right next to the stage and I wasn't far behind her. She threw one of her plastic pink bracelets on stage in hope that Daniel might find it and wear it (which he probably didn't).

After the concert I went to the back where they were selling T-shirts which I was going to buy until I saw the autographed copy's of Neon Ballroom (three to be exact were left) and my friend bought one this girl bought one and I got the last copy! With Daniel's finger print smeared where he signed his name!

Well, that about concludes my night at the Quest seeing silverchair. Oh yeah and I got a whole shit load of 93X stickers (the best radio station in the world). My parents were thinking I was on speed because of the total adrenaline rush I was having. But God who wouldn't?