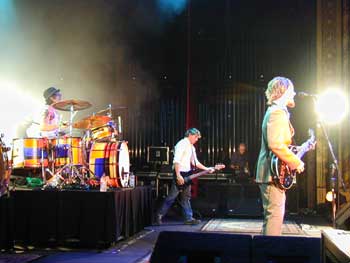 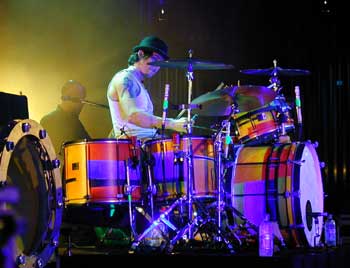 After the show had been built up by so many other reviews and reports I had read, I was expecting something extraordinary... I got it.

Milling around outside the theatre before the gig you could definately sense a home crowd vibe and everyone couldn't wait to see the boys. The actual sizing of the theatre is what amazed me to begin with... It was very small but not too small. It created a feeling of intimacy, but the crowd atmosphere still remained strong.

Daniel's prescence was certainly felt when he entered the stage to begin with a breathtaking version of "After All These Years" followed by a reunion with his band members for "World Upon Your Shoulders". All of them looked very well presented in there attire - Ben in a nice hat. 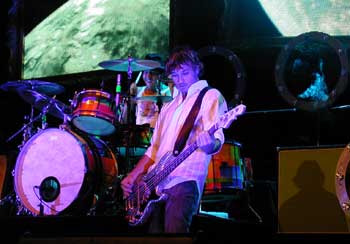 The three screens and lights were very well used throught out this "Act 1" but the sheer sound of the songs was enough to keep anyone entertained. My personal favourite of the first half was the emotionally and brilliantly presented "Ana's Song". Other highlights included the energetic "Across the Night" (in which Johns was seen guitarless) and the visually stimulating sequence in "Luv Your Life". The wrap up of this first act was an extended version of "Steam will Rise" which perfectly rounded off the end to this half.

After a short intermission the boys returned (slightly more scantily clad and with a new set-up) for the "heavier" act of the show... It kicked off with a brilliant rendition of "Emotion Sickness" which used a new lighting background to express the song. This was a magnificent opening followed by "Without You" and possibly one of the most energetic songs of the night - "Slave". 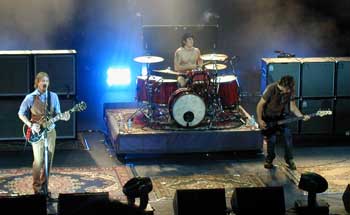 A few more mellow songs followed this including "Black Tangled Heart" the long awaited "Petrol and Chlorine" and "Do You Feel The Same". After these were out of the way - the real metal kicked in with (what I believe to be the bands favourites) "The Greatest View" and "The Door". Johns introduced the with such comments as "This song rocks," and "You'll love this one."

Another higlight of this half was "Freak" which involved much audience participation as well as "Anthem for The Year 2000" which saw images of Iraq in the background adding a somewhat serious feeling to the song.The half ended on "One Way Mule" which surprisingly fit in very well.

Daniel returned for a peaceful encore of "Asylum" before rocking into "The Lever" and then the boys just went crazy with there instruments in a jam that no one will forget.

Through the night, Daniels eccentricity shon through, but was adored by the crowd... Especially in his passionate kiss with his beloved guitar at the end of the show.

All fans left talking about the show while not one word was muttered about the terrible weather and the painful drive home. And even during that painful drive- I know from experience - it was the show which was topic of conversation. 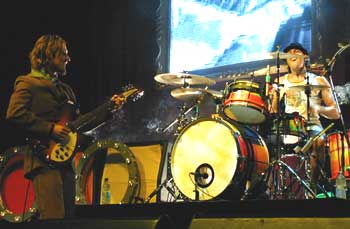