Wearing my silverchair meditating llama T-shirt and a spring jacket, I arrived at the Electric Factory at 8 p.m. Inside, to the left of the door, was a snack bar and to the right was the T-shirt stand, with silverchair shirts and Fuel shirts. Fuel was the opening band; I was disappointed that Handsome did not play as they did on most of the rest of the tour because I was expecting to hear them.

The floor was wide open and there was a balcony on the right where alcohol was served for those over 21. In the middle was the lighting and sound equipment. To the left were metal bleachers. 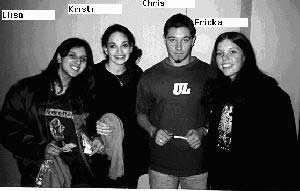 At 8:40 p.m., Fuel took the stage. Their music was good, but I was sort of annoyed a bit during their set because a couple on the bleacher below me kept kissing intimately and I just wanted to scream, "Get a room!"

Fuel left the stage at 9:25 and silverchair came out about 20 minutes later. The stage was decorated with banners including the 10,000 volted woman, the talking head without a body, a snake wrestler, the human pin cushion, and the contortionist. Everyone stood up at 9:45 when the circus music came on! And of course, people on the bleachers got the best view. Daniel wore the Freaks movie shirt and khaki-colored pants Ben was shirtless (again) and wore had black shorts. Chris wore a navy shirt and black shorts.

The band started out with Slave and then ripped into Roses. And if you like when Daniel points to the crowd in Freak, he also pointed to the crowd when he sang, "Take your mind with you!" A shirt was thrown up on stage and Chris kicked it. Then they went into Findaway, after which Daniel said "Thanks!" and something like, "This song is always on the radio."

Bailey Holloway of the stage crew came on stage and Daniel told the crowd that he had previously played for Black Sabbath. Then, with Bailey playing second guitar, the band played Abuse Me. Next was Freak, and many people were crowdsurfing. Security guards kept catching people heading towards the front. Instead of saying, "As cool as you," Daniel said, "As cool as all of fucking you!"

After Freak, Ben and Chris disappeared, and Daniel announced, "I'm gonna play this song by myself. It's called Cemetree." He used the orange guitar with the No Religion sticker, if anyone cares. Then came Suicidal Dream and Tomorrow. After Tomorrow, Daniel said, "Philadelphia fuckin' rocks! I just said that to make you yell. But you do, you fuckin' rock!" Then came The Door and Daniel did his "dance," whipping his hair around.

Then, silverchair ripped into Faultline, which didn't get much response back from the crowd. Daniel then played a guitar which looked new -- it was either navy blue or black with no stickers on it. "This is a new guitar," he said. "I never played with this one before. The next song is track five off the new album. Wait... no it's not!" It turned out to be Pure Massacre, which got everyone extremely rowdy.

Two boys jumping on the bleacher made it rock back and forth and I was on the end of the bleacher, jumping as well. Somehow the bleacher seats shook a little too much and I fell off. I didn't get hurt; I was just laughing so hard.

No Association was next (one of my favorites), then Madman, to which Daniel did his usual "go wild" routine.

The band left the stage and the crowd eventually started chanting "sil-ver-chair."! They came out and played Paranoid, which made me want to jump again, but I didn't. After Paranoid, Daniel said, "Thanks for all coming. Philly rocks!" And I knew the end of the night was near when Israel's Son came on. The speakers were smoking during Israel's Son. Daniel went crazy by the guitar speakers at the end, practically making them fall down. Ben stood up and played his drums from the frontside then flung his drumsticks out to the crowd. They soon disappeared and the lights went up.

February 22 was the day silverchair was at the Electric Factory in Philadelphia, PA. I arrived at the show at a good time, half an hour before the show actually started. I got a really good place to stand -- eventually. The lights went dim after an announcer read off all the concert schedules for around the area. Then little dark figures came on stage and the lights went to a blaring pink, green and white. The first song was Slave which featured Ben pounding on the drums and Daniel's soothing screams.

The funniest part of the show was when Daniel said that Indian rock rules. The crowd roared as they started to play Abuse Me.

When it came time for the encore, the Philadelphia crowd actually made noise. "We want more," the fans chanted. silverchair returned for a few more songs starting with a good cover of Black Sabbath's Paranoid. The closing song was Israel's Son, although I thought they should have done The Closing.