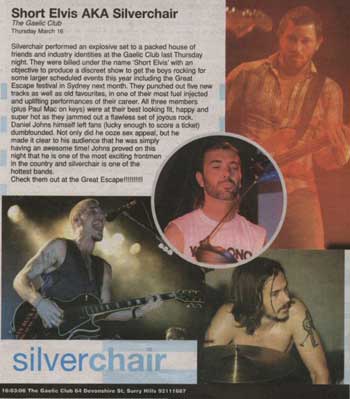 Silverchair performed an explosive set to a packed house of friends and industry identities a the Gaelic Club last Thursday night. They were billed under the same name ‘Short Elvis’ with an objective to produce a discreet show to get the boys rocking for some larger schedules events this year including the Great Escape festival in Sydney next month. They punched out five new tracks as well as old favourites, in one of their most fuel injected tracks as well as old favourites, in one of their most fuel injected and uplifting performances of their career. All three members (plus Paul Mac on keys) were at their best looking fit, happy and super hot as they jammed out a flawless set of joyous rock. Daniel Johns himself left fans (lucky enough to score a ticket) dumbfounded. Not only did he ooze sex appeal, but he made it clear to his audience that he was simply having an awesome time! Johns proved on this night that he is one of the most exciting frontmen in the country and silverchair is one of the hottest bands.