silverchair was the first "major" band in the Edgefest Vancouver lineup, as their set began at 3:25 p.m. This was only my third time seeing silverchair live, and this is the best I have ever heard them sound. This was also my first time seeing them at an outdoor venue, and I have to say that their live shows belong OUTDOORS!

After seeing the other bands, I noticed that Ben's drums were louder than anyone's. I could feel each hit of the bass drum like it was hitting me in the face. And by the way, Ben had a mohawk!

Daniel was in a great mood and was very talkative, I caught some of his quotes, but please note none of them are exact as it is sometimes difficult to understand his Australian accent.

After this, Daniel put a beanie on just for Suicidal Dream. Before Tomorrow, Daniel said something like, "This is our number one grunge hit, this song is bigger than the Beatles." (crowd laughs).

Before The Door, Daniel talked a lot and I only caught parts of it: "This is going to be the most rocking moment, ready everyone? Jump! Rock the house, yo! Say 'HAY-O' (crowd says 'HAY-O!') I only did that 'cause I saw Sting do it on video once. Say 'hallelujah!' (crowd yells 'hallelujah!') All right, are you MOTHERFUCKIN' READY?" Daniel said "JUMP!" countless times, almost during every song.

The first three songs sounded about the same as last time I heard them live, but Pure Massacre sounded a lot tighter and fuller. The pit really got into this one!

Suicidal Dream sounded very full as well, and Daniel's guitar tone sounded very thick and clear. I read in other reviews that Chris extended the bassline in this song, but he did not do that in Vancouver.

Tomorrow was about the same as most live shows, as Daniel sang, "The water in Vancouver is very hard to drink." Nearly every time I've heard them live, the Tomorrow solo has been improvised, as it was once again, sounding better than ever.

No Association and Freak got the pit going the most, but the entire crowd had the best response to No Association.

In Freak the instruments stopped for about a minute. I thought the PA went out or something, but Daniel kept singing the normal words, vocal only. It was quite a change and some people were singing along, but others were yelling various things like, "Start rocking!"

Portions of silverchair's performance at Edgefest in Vancouver were broadcast live on the Internet in the background of interviews with other artists appearing at the event.

Parts of Suicidal Dream, Cemetery, Tomorrow, The Door, Freak and Israel's Son could be heard via the Virtually Canadian web site, which was broadcasting from the event at Vancouver's Thunderbird Stadium.

The interviewer noted that 30,000 people were present for silverchair's set (which began at 3:25 p.m. local time) and that it was the highlight of the day to that point. "People are going crazy" for silverchair, she said.

Despite the fact that silverchair were performing in the background of the RealAudio broadcast, a new twist could be heard in the band's live show. During the "body and soul" portion of Freak, the band stopped playing as Daniel Johns sang the lyrics. He exhorted the crowd to join in, and it did.

silverchair was third to perform on the main stage that day. The weather was crappy and silverchair was the first major band of the day. There were 30,000 people at the concert and probably a lot of them were watchin the 'chair then. 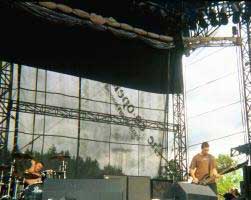 Finally at 3:30 Daniel, Ben and Chris came on stage. Daniel had dreads in his hair and Ben had a mohawk. They immediately kicked off with Slave, as usual. The mosh came alive and we had thousands of people smashing each other.

I found this show to be much more entertaining than the last one I saw. Daniel swore so much it was funny. He made up some song about "Bailey the roadie" (Bailey, the extra guitar guy for Abuse Me). His voice was so high it was squeaking.

He did a little gangsta' impersonation. They played Tomorrow calling it "bigger than the Beatles." For Tomorrow, Daniel sang, "The water in Vancouver is very hard to drink."

I found this all the more amusing than his usual comments of "thanks." I tried to take pictures during the show but it was quite impossible because of how crowded it was. They played a really awesome 55-minute show. It rocked. It ended with Daniel fooling with the amps and Ben throwing his drum sticks far into the crowd. I thought this concert was better than the last one I saw.

I saw silverchair live in concert tonight in Vancouver as a part of the Edgefest. The pit was much better this time because all the dumb little chicks finally had enough by about two songs into their set, so it was mainly the hard-core people.

The people in this pit were also much nicer. Just so all of you know, the Edgefest sold out with 30,000 people there which I thought was way cool, although I'd love to see silverchair in a smaller venue with only them and their opening acts because festivals are very impersonal.

What else? Dan has dreadded his hair -- this is cool because I'm half Jamaican. And Ben has an inch-high mohawk -- rock on, punker boy! They all look really clean cut. They played the regular set -- Slave, Leave Me Out, The Door, Cemetery, Tomorrow, Israel's Son, Pure Massacre, etc., not in that order though.

Dan socialized with the audience more -- at one point asking us to yell "Halleluia." He was wearing these weird glasses and hats for a couple of the songs.

From: "Andie the FrEaK" (jamands@nanaimo.ark.com)

I just got back from the Vancouver show... IT KICKED ASS! Daniel was really getting into it. They were the third band on the main stage, which was cool. Daniel's got dreadlocks. His hair is a reddish-blond color and it looked like some parts were bleached white. Ben has a mohawk-skunk stripe thing. It's about two inches thick and couple of centimetres high. I'm tired and having a hard time breathing. I just wanted to say IT ROCKED!

This was my first time seeing silverchair live and I have to tell you that they freakin' rock live! The first thing I noticed when they came on the stage was Daniel has dreads. It's a great look for him -- but God is he skinny. 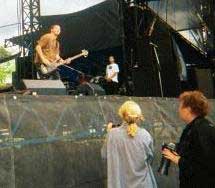 Daniel started off by saying "Hello" and then singing the word "Vancouver" and then they jumped into Slave and Leave Me Out. There was a bit of trouble in the mosh pit for Slave due to about 20 people falling over and getting trampled (me included). A lot of girls who got trapped underneath were screaming and crying. Finally someone started helping people up and everyone went back to enjoying themselves.

Pure Massacre sounded awesome -- the CD does them no justice for that song. After Pure Massacre Daniel did his homey impersonation thing and said, "Vancouver rocks the house. One more time in the hood y'all." Then he introduced Bailey. I don't remember exactly what he said but it was something like, "That's Bailey, our roadie. He's really cool. I'm going to teach you guys a song I wrote about him. It's called Bailey the Roadie." Then he sang "Bailey the roadie" and got the crowd to repeat then "He's really grody" and everyone repeated that. Then he did the same thing again and then he sang it with the crowd a few times, each time his voice got higher and more off pitch until the last time he sang it and he basically croaked it in this really high voice. Then he said something like "that's never worked before" or "I've never done that before." I couldn't tell, it was too difficult to hear. 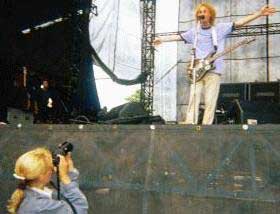 Daniel then put on a gray woolly beanie for Suicidal Dream. But he kinda just sat it on his head. After Suicidal Dream he said, "This is too fucking itchy" and he flung the beanie across the stage. Cemetery sounded pretty good compared to live versions I've heard before. It was much fuller sounding and was played really well. Before Tomorrow he said, "This is our number one grunge song. Yeah -- it's bigger than the Beatles." Everyone laughed at this. I think it was then too that he started spitting up into the air and watching it fall behind him -- he did that a few times throughout their set.

Daniel did his usual "the water in Vancouver is very hard to drink" and "you think you can keep on going living like a schlong" for Tomorrow. The solo was improvised and sounded awesome. To introduce The Door he said something like, "This is going to be our most rocking moment" and "Is everyone ready to rock?" Then he yelled "jump" and everyone started pogoing. Then he said, "Say whoa-oh" and the crowd repeated, and then "I only did that cuz I think I saw Sting do that on the telly once." And then "Say halleluia!" and everyone repeated. He had a big grin on his face for that. No Association rocked. That really got the pit going and Daniel seemed to really get into it. 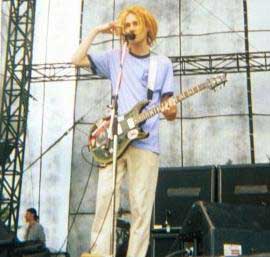 During Freak when Daniel sings "Body and soul, I'm a freak," he sang it really slow and nice, and he had this big fake smile the first two times he sang it. Then they all stopped playing and he continued to repeat it (only normal this time) and got the crowd to sing along. Then the last time he sang "Body and Soul" and then screamed "YOU'RE A MOTHERFUCKING FREAK!"

For Israel's Son Daniel was screaming, "Put your hands in the fucking air" into the mic over a dozen times and he was running around the stage with his guitar on his back while he was saying that. Then he jumped up on his amps and was creating all this feedback. Ben threw his drumsticks into the crowd (he threw them pretty damn far) and then he and Chris both left the stage while Daniel continued to screw around with his guitar. Finally Daniel leaned his guitar against his amps and left the stage with the guitar still squealing as he left.

At one point -- I don't remember when -- someone threw sunglasses on stage. Daniel tried to put them on but they didn't fit properly so he sort of wedged them on his forehead. He took them off eventually and threw them into the crowd. Chris looked like he had a cold too -- he was hacking and coughing threw the entire thing. Anyway, that's my account.